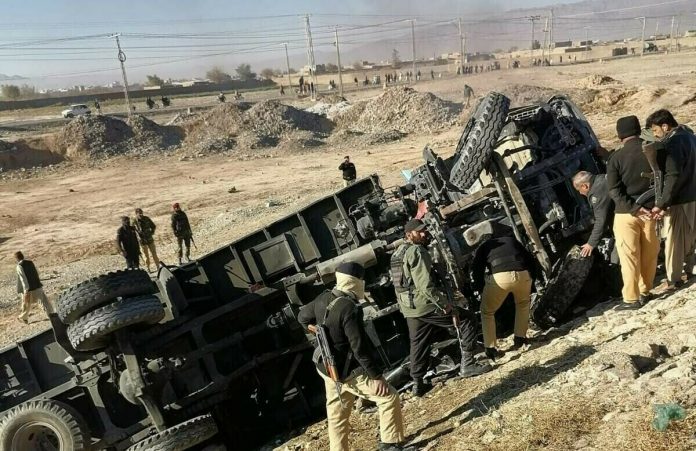 QUETTA: At least two soldiers of Frontier Constabulary were killed and over 20 others wounded in an a suspected suicide attack in Balieli area of  Quetta on Wednesday morning.

According to initial reports, the nature of the attack is uncertain but believed to be a sucidie attack. The deadly attack targeted a truck carrying personnel of Frontier Constabulary (FC).

The banned outlet Tehreek-e-Taliban Pakistan (TTP), who a day earlier announced of ending ceasefire agreement with Pakistan and ordered its militants to stage nation wide attacks against security forces, has claimed responsibility of the attack. This is the first attack carried out by the outlawed TTP after its announcement.

A heavy police and Rangers contingent has reached the site and sealed the area. The bomb disposal squad has been called in as well.

While speaking to the media, Quetta DIG Azfar Mehsar said that the police officials were going to provide security to the polio workers, when a rickshaw hit the police van that made the vehicle topple down and fall into a ditch.

Subsequently, two people succumbed, including an officer while at least 20 people have left injured. However, four civilians were also included in the injured people along with the officials.

He added that around 20 to 25 kilograms of explosive material were expected to be used. The threat continues to prevail on his team, he said.

Evidence is being collected from the crime site, while further investigations are underway.

The casualties were rushed to the Civil Hospital for treatment.