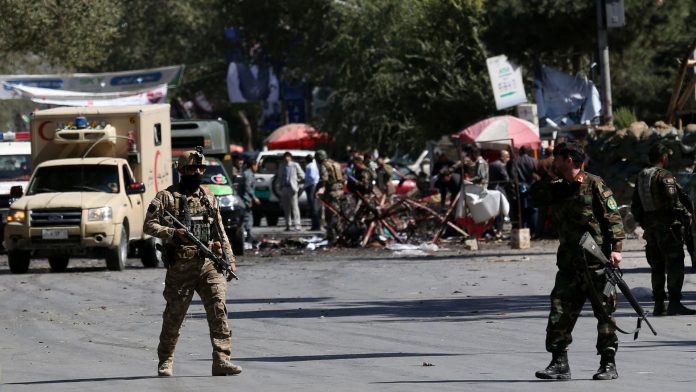 KABUL: Twenty-seven people died and at least 29 were wounded on Friday when a rally led by Afghanistan politician Abdullah Abdullah came under attack from gunmen.
The Taliban immediately denied responsibility for the assault, which occurred at the commemoration ceremony for Abdul Ali Mazari — a politician from the Hazara ethnic group.
Interior ministry spokesman Nasrat Rahimi said gunfire had erupted from a construction site near the ceremony in the city’s west.
“Soon after the attack, police forces and police special forces units rushed to the scene,” Rahimi told a local news station, noting that sporadic gunfire was ongoing.
Photos on social media showed at least two bodies, but there was no official word on a death toll.
“We left the ceremony following the gunfire, and a number of people were wounded, but I do not have any reports of martyred people for now,” Hazara leader Mohammad Mohaqiq told Tolo News.
The ceremony was attended by many of the country’s political elite, including Abdullah Abdullah.
The interior ministry later confirmed to reporters that “all the high-ranking officials were safely evacuated from the scene”.
The incident comes less than a week after the US and Taliban signed a deal that would pave the way for the complete withdrawal of foreign troops in 14 months.
However, fighting has continued to rage across the country, casting a pall over hopes that the agreement would lead to a reduction in violence. …Agencies