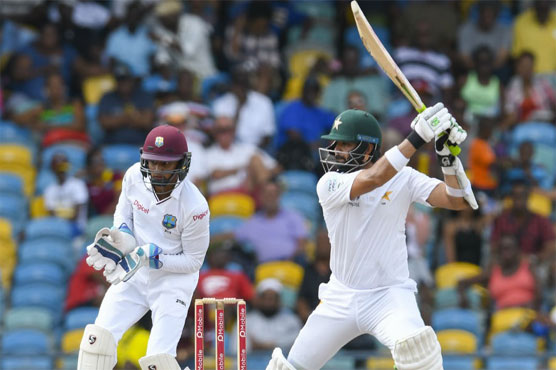 BRIDGETOWN: West Indies hit back with three wickets in the final hour after a 155-run opening stand as Pakistan reached stumps at 172 for three in reply to the home side s first innings total of 312 on the second day of the second Test at Kensington Oval in Barbados on Monday.
Azhar Ali held firm at one end for an unbeaten 81 in a five-hour vigil after opening partner Ahmed Shehzad rode outrageous moments of luck to contribute 70 in the first-wicket partnership. He resumes on the third morning alongside captain Misbah ul Haq.
Leg-spinner Devendra Bishoo eventually broke through for the home side by having Shehzad caught at slip before adding the prized scalp of Younis Khan for a “duck” when the veteran pulled a long-hop to Shannon Gabriel at midwicket.
In between those dismissals, Gabriel removed Babar Azam, also without scoring, to a catch off his own bowling. It was no more than the burly fast bowler deserved although his earlier misfortune was compounded by chronic no-ball problems.
Dropped at mid-on by Vishaul Singh just as Pakistan started their reply in the morning session, Shehzad was then ruled LBW off Gabriel when on 21 in the post-lunch period only for the decision to be overturned after television replays determined the delivery to be a no-ball.
Lightning then struck twice for the same man after he was stranded down the pitch and stumped to the bowling of off-spinner Roston Chase on 32, the batsman almost reaching the pavilion when he was summoned by the umpires to return to the crease as the replays again showed the bowler to have transgressed the front crease.
“There was variable bounce out there so it was really difficult to get going, but I have to admit that I had more than my fair share of luck,” said Shehzad.
“I can t give enough credit to Azhar for the way he has played and if he can continue on the third day and help give us a lead, then we have a good chance to win this match and the series.”
Those lucky moments consolidated what had been Pakistan s day until the final hour after they wrapped up the West Indies first innings within an hour of the start.
Mohammad Abbas led the visiting bowlers effort with two more wickets to finish with four for 56, the best figures by a Pakistan fast bowler in Test innings at the venue, bettering Wasim Akram s four for 73 in 1988, as the home team lost their last four wickets for the addition of 26 more runs.
West Indies hopes of pushing towards a total closer to the 400-run mark were dashed within the first nine deliveries of the morning as their first-day heroes, Chase and Jason Holder, were dismissed without any addition to the overnight total of 286 for six.
Holder was the first to go, his late decision to pull away from an Abbas delivery resulting in an inside-edge to wicketkeeper Sarfraz Ahmed. Mohammad Amir then removed Chase, whose 131 was the first Test century by a Barbadian on home soil for 18 years. Drawn forward by a full-length delivery, his indeterminate prod resulted in a thick outside edge for Younis Khan to snare his third catch of the innings at second slip.
Bishoo played in his usual pugnacious manner but Abbas request of his captain for another over reaped immediate rewards when Bishoo lifted an on-drive to Yasir Shah at mid-on. Shah then wrapped up the innings when Alzarri Joseph was bowled missing a heave at a full-toss in the leg-spinner s first over of the morning.