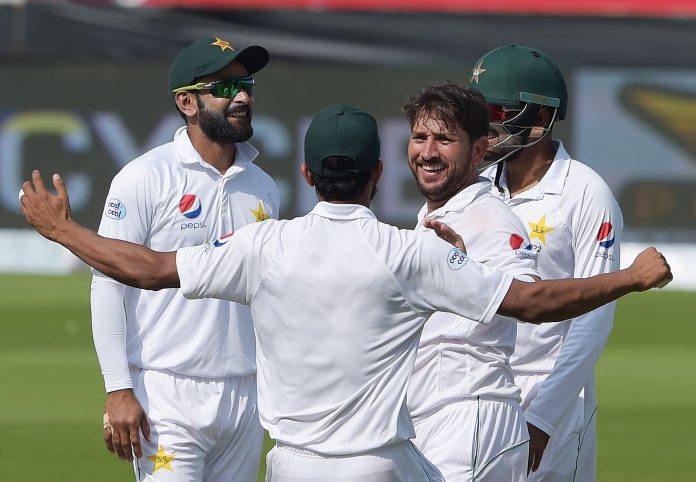 DUBAI: Yasir Shah’s spin magic bowled out New Zealand for a mere 90 runs on a rain-affected third day of the second Test in Dubai on Monday.
The leg-spinner bagged eight wickets, including three in an over, to wrap up the tourists’ innings just after lunch.
Yasir had opener Tom Latham (22), Ross Taylor (nought) and Henry Nicholls (nought) as the match spurned into life after an hour´s delay due to overnight rain and drizzle in the morning.
He also removed opener Jeet Raval (31), Ish Sodhi (nought), Neil Wagner (nought), Ajaz Patel (4) and Trent Boult (nought), as New Zealand trailed Pakistan’s imposing 418-5 declared by 328 runs.
Earlier, New Zealand, resuming at 27 without loss managed to reach 50 without losing a wicket before Yasir struck.
Opener Jeet Raval was unfortunate to get bowled by a Yasir´s delivery as he tried to reverse sweep but the ball deflected off his bat to his thigh and hit the stumps.
From 50-1 it became 61-2 when Yasir had Latham caught at short-leg by Imam-ul-Haq off the first ball of his ninth over.
Two balls later he bowled experienced Ross Taylor with a beautiful delivery that turned and beat the forward push by the batsman.
Off his fifth ball Yasir bowled Henry Nicholls through the gap between bat and pad.
New Zealand lead the three-match series 1-0 after winning the first Test by four runs in Abu Dhabi.