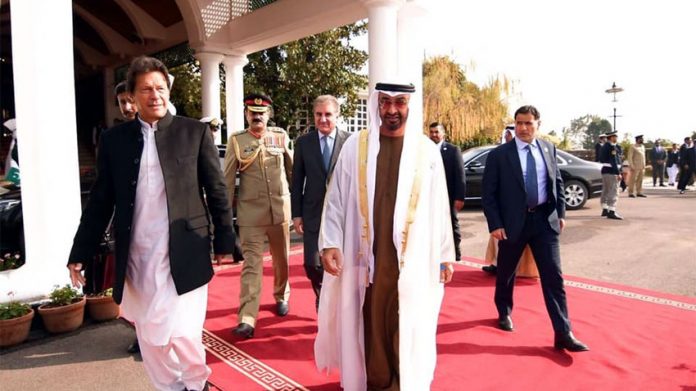 ISLAMABAD: Crown Prince of Abu Dhabi and Deputy Supreme Commander of UAE Armed Forces Sheikh Muhamed bin Zayed Al Nahyan Sunday departed here after completing his one-day visit.
During his visit, the crown prince met Prime Minister Imran Khan and held delegation level talks wherein the two sides discussed the strengthening of bilateral ties and cooperation.
Minister for Power Omer Ayub khan and senior government officers saw off the crown prince and his delegation at the Airbase.
The static guards of the Pakistan Air Force presented salute to the guest.
Before departure, the crown prince was presented a photo album carrying photos depicting his engagements during the visit.
Earlier in a formal welcome ceremony held at PM House, he was given guard of honour and JF-17 Thunder jets performed flypast.
On his arrival, the prime minister received the dignitary and also drove him from the airbase to PM Office, keeping aside the protocol.
The crown prince had last visited Pakistan in January 2007. According to Foreign office, this was the third interaction between the leadership of Pakistan and UAE in less than three months, which was a testimony to the special nature of our brotherly relations with this important GCC country.