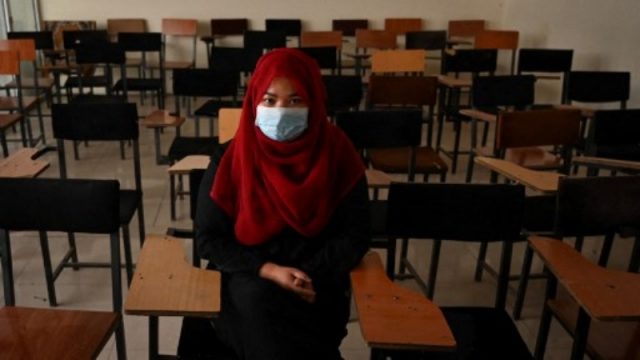 Kabu: Universities in Kabul were almost empty on the first day of the Afghan school year, as professors and students wrestled with the Taliban’s restrictive new rules for the classroom.

The Taliban have promised a softer rule than during their first stint in power from 1996-2001, when women’s freedoms in Afghanistan were sharply curtailed and they were banned from higher education. This time, the hardline Islamist group has said women will be allowed to go to private universities under the new regime, but they face tough restrictions on their clothing and movement.

Women can only attend class if they wear an abaya — a flowing robe — and a niqab — a face veil with a small window to see through — and are separated from men, the Taliban said.

“Our students don’t accept this and we will have to close the university,” said Noor Ali Rahmani, the director of Gharjistan University in Kabul, on an almost empty campus on Monday.

“Our students wear the hijab, not the niqab,” he added, referring to a headscarf.

The Taliban education authority issued a lengthy document on Sunday outlining their measures for the classroom, which also ruled that men and women should be segregated — or at least divided by a curtain if there are 15 students or less.

From now on at private colleges and universities, which have mushroomed since the Taliban’s first rule ended, women must only be taught by other women, or “old men”, and use a women-only entrance.

They must also end their lessons five minutes earlier than men to stop them from mingling outside. So far, the Taliban has said nothing about public universities.