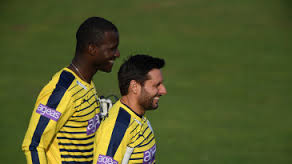 DUBAI: Shahid Afridi has announced Darren Sammy as the captain of Peshawar Zalmi for Pakistan Super League (PSL) 2017 after stating that he was disrespected by West Indies cricket board.
The development came in as Afridi took the stage for a short while to make two quick announcements during PSL drafting ceremony held in Dubai.
The former captain of Zalmi, Afridi, announced appointment of Younus Khan as Mentor of the team for the second PSL.
Shahid Afridi mentioned that Sammy was not respected by West Indies board as he was removed from captaincy of the national team over his criticism for allegedly not backing the boys during Twenty20 World Cup which they went on to win.
After team’s warm reception, Sammy in his speech had criticised the board following which he was stripped off captaincy.