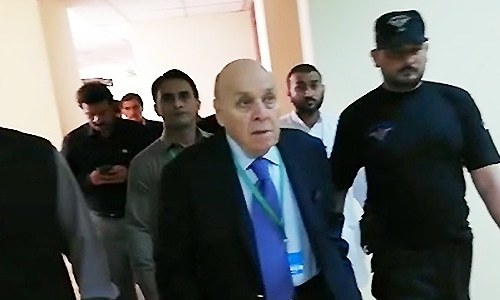 KARACHI: A banking court in Karachi approved the physical remand of former president Asif Zardari’s close aide and Omni Group Chairman Anwar Majeed and his son Abdul Ghani till August 14 in money laundering case on Friday.
Both the suspects were produced before the court by Federal Investigation Agency (FIA) without handcuffs.
Majeed objected over the presence of media personnel in the court and asked the FIA officials to remove them.
Majeed and his son were arrested outside the Supreme Court after Chief Justice of Pakistan Justice Saqib Nisar rejected pre-arrest bail plea of Anwar Majeed during the hearing of their case on August 15.
“We don’t want to waste time on forming a joint investigation team (JIT). We will continue to supervise this case as suo moto action was taken against it,” the top judge remarked.