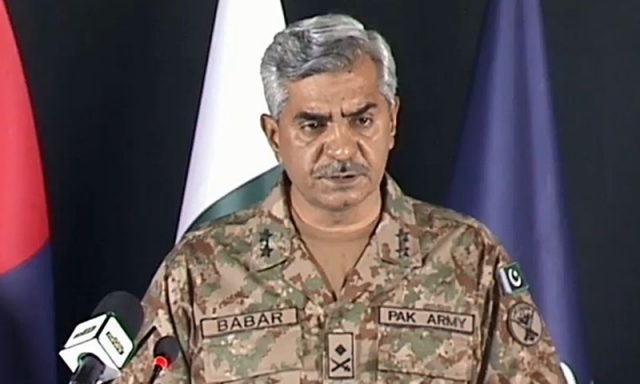 Addressing a press conference here on Thursday, Major General Babar Iftikhar that any deliberate or unintentional attempt to create a rift between the people and the army is against the national interest.

He said that Chief of Army Staff General Qamar Javed Bajwa neither want any extension nor will he be accepting an extension in his post, and retiring on November 29, 2022.

When asked about the no-confidence vote and Imran Khan, he said, the Prime Minister’s Office approached COAS and asked for help in resolving the situation on Sunday.

He also expressed disappointment in the fact that political leaders cannot talk to each other. The DG said that this is why the army chief and the DG met Imran Khan and discussed options with him. “I have never asked for meetings with any politicians, why are politicians asking for meetings with us.”

He said he could not exactly talk about the discussion that took place in the meeting due to confidentiality issues and whatever could be revealed has been issued in an ISPR statement, while specifying that the word conspiracy was not used in the document.

Further speaking about neutrality, the DG specified that “our constitutional and legal role in the government set up doesn’t allow any political interference or allegiance.”

In the last 74 hours, the only demand that people have made is that the army doesn’t involve itself in politics, he said, while adding that “the last time COAS appeared before the parliamentary committee on national security, he informed the leadership that the army wants to distance itself from politics.”

“Any intentional or unintentional effort to create divisions between the army and people is tantamount to threatening national security,” said the major general. He further condemned baseless accusations, especially the “malicious propaganda campaign being run against army chief, including using deep fake technology…and dissemination of fake messages.” He said “such campaigns did not work in the past and they will not in the future. I request that the army is kept out of them.”