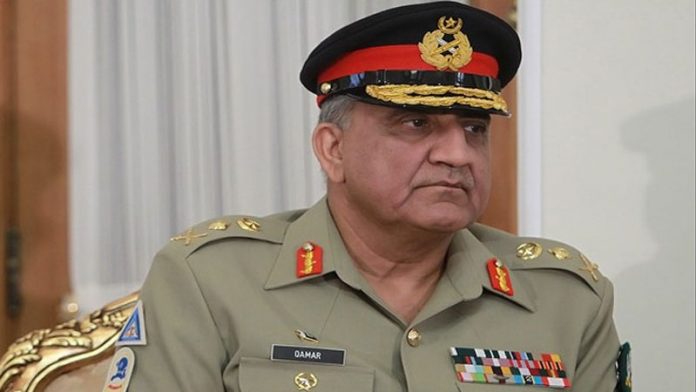 RAWALPINDI: Chief of Army Staff (COAS) General Qamar Jawed Bajwa termed on Saturday recent terrorist attacks in which ten personnel of the Pakistan armed forces were martyred “dying efforts of frustrated inimical forces.”
In a tweet, the Director General Inter-Services Public Relations (ISPR) quoted the army chief as saluting the martyrs and their families.
“We shall ensure defence & security of motherland at the cost of our sweat & blood. These are dying efforts of frustrated inimical forces while Pakistan moves from stability to enduring peace. It’s time for the world to facilitate regional peace” the DG ISPR quoted COAS as having said.
Earlier today, ten personnel of the security forces, an officer among them, were martyred in two separate attacks in North Waziristan tribal district and Balochistan, according to ISPR.
“Shahadat of 6 sldrs [soldiers] on Pak-Afg Bdr & 4 in Bln [Balochistan] is the sacrifice Pakistan making for peace in the region,” the military’s media wing tweeted.
“While security of tribal areas has been improved with efforts now focused to solidify border, inimical forces are attempting to destabilise Bln. Their efforts shall IA fail.”