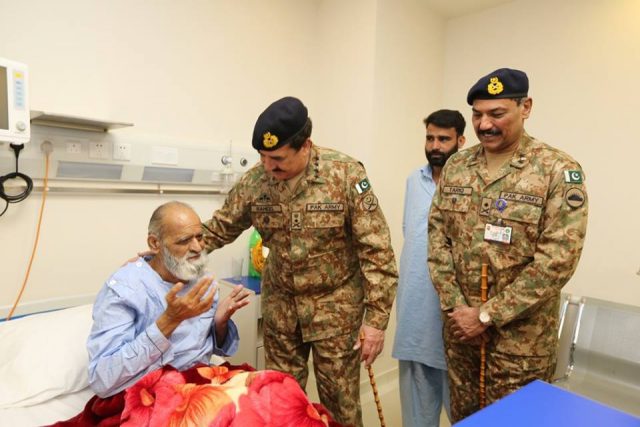 RAWALPINDI: Chief of the Army Staff (COAS) General Raheel Sharif Monday visited Army Liver Transplant Unit (ALTU) and was briefed about state of the art facilities being provided at the unit.
The COAS visited different departments of the institute and spent time with patients and inquired about their well-being, an Inter Services Public Relations (ISPR) news release here said.
Appreciating doctors and paramedical staff of the institute, the Army Chief commended their commitment and dedication for
establishing such a facility and best medical care being extended to the patients.
ALTU is the first liver transplant programme introduced in Pakistan Armed Forces and third in the country which is being developed as a national multi-organ transplant centre. So far 260 successful hepato-pancreato-biliary (liver related) and six successful live liver transplant surgeries have been performed so far in consultation/collaboration with University Hospital Birmingham, United Kingdom.
Earlier on arrival at ALTU, the COAS was received by Lieutenant General Anwar Ali Hyder, Adjutant General Pakistan Army and Major General Tariq Hussain, Commandant Military Hospital.