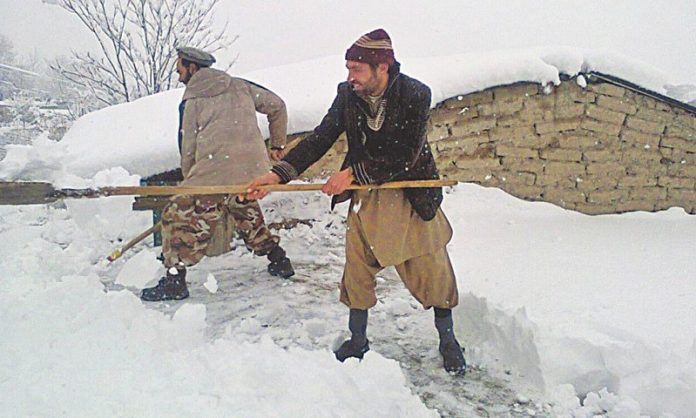 ASTORE: After a break in continued snowfall for couple of days with clod breezes blowing in almost all upper areas of Gilgit-Baltistan including Astore, the hardships of people have increased with freezing condition and closure of some main roads.
According to reports received here on Tuesday, intermittent rain and snowfall has taken a break in Astore and other upper parts of the GB but people confined to their houses due to roads closures and chilly breezes were complaining regarding scarcity of daily use commodities especially the fire wood to keep themselves warm as and temperature has drastically dropped to below zero level.
Approach roads to Deosai, Kmari and Mini Marg were covered with thick layer of snow, disconnecting these localities to other adjoining areas and adding to problems for the residents.
However, staff of the Public Works Department (PWD) is hectically engaged to clear the roads with help of machinery.
Profiteers were making quick bucks and capitalizing on the sufferings being experienced by local people.
Rates of firewood have soared manifold and its one mound was sold at 900 rupees, similarly domestic 11-kg cylinder was refilled at exorbitant rate at Rs 1650 while Rs 1800 was charged for 15-Kg cylinder.
Thus people of the those areas have demanded of the concerned authorities to stop shopkeepers from this artificial price hike especially of firewood and take an action against businessmen cashing the situation.
They demanded the government to supply enough food items to market especially wheat in order to extend relief to consumers. …APP