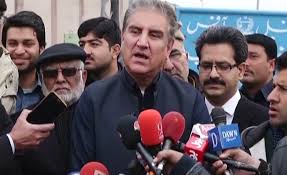 ISLAMABAD: An anti-terrorism court (ATC) Thursday granted bail toPakistan Tehreek-e-Insaf (PTI) leaders including Shah Mehmood Qureshi, Shireen Mazari, Arif Alvi, Asad Umar and Shafqat Mehmood in a case of attack on the Parliament and the PTV in the 2014 sit-in in Islamabad.
On a clean chit by the investigation officer, the court said Mazari needs not file for her bail and ordered the return of surety bond worth Rs100,000 to her in the case.
Talking to media after the hearing, Qureshi deplored the fact that terrorism clauses have been made part of the cases against political leaders.
Shireen also resorted to micro-blogging website and said the judge found out that she was named in the original FIR; hence, the warrant issued against her was not legally binding.
The court is hearing the cases of the attack on the state television building, Parliament and the then-Islamabad SSP Operations Asmatullah Junejo.
In a hearing last month, the court summoned PTI chairperson Imran Khan on February 15 in the same case.
It should be mentioned here that the workers of Pakistan Awami Tehreek (PAT) and the PTI attempted to break a police cordon on September 1, 2014.
The two parties were staging a protest sit-in against the alleged rigging in the 2013 general elections.
The 2014 sit-in clashes left three people dead and several others wounded; of them, 77 were security officials deployed in the Red Zone, including SSP Junejo.