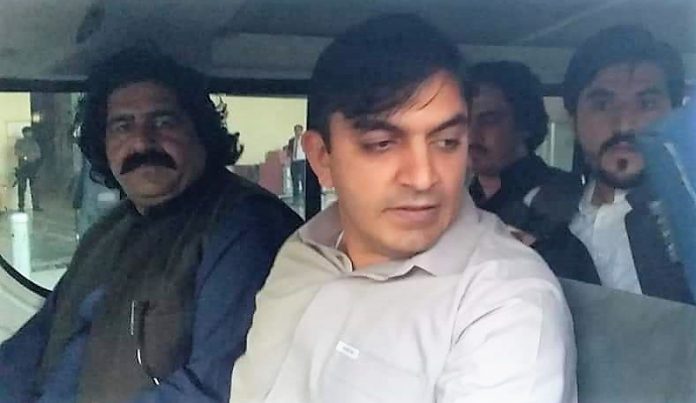 PESHAWAR: A Peshawar antiterrorism court on Saturday granted bail to incarcerated Pashtun Tahaffuz Movement (PTM) MNAs Ali Wazir and Mohsin Dawar in one case, but rejected their plea for bail in another case.
The two MNAs — currently imprisoned in Haripur jail — have been nominated in two separate cases pertaining to Improvised Explosive Device (IED) attacks targeting security forces in North Waziristan.
One first information report (FIR) was registered by the Counter Terrorism Department (CTD) in Bannu against the PTM MNAs for allegedly attacking a security checkpost on May 26 in the Kharqamar area
According to the FIR, both MNAs along with their supporters “attacked the security post”.
The second FIR was registered by CTD Bannu following a June 7 IED attack near a security checkpost in Kharqamar, where an Army convoy was on routine patrol. The incident left three officers and a soldier martyred and four security personnel injured.
Both Wazir and Dawar were already in CTD custody at the time of the IED blast ─ they had been arrested following the May 26 Kharqamar checkpost attack. Wazir had been taken into custody the day of the attack, while Dawar surrendered himself to security forces a few days later.
The hearing on the request for bail in both cases was conducted by ATC judge Babar Ali Khan today, who via a short order granted the request for bail in the June 7 incident but rejected it for the May 26 case.
Senior prosecutor Fazal Noorani, Arif Bilal and Sardar Abdul Rauf made arguments on behalf of the state whereas the defendants were represented by a team led by Peshawar High Court Bar President Latif Afridi.
Tariq Afghan, a member of the PTM legal team, told DawnNewsTV that they argued before the court that their clients were innocent, adding that they also produced videos and other evidence.
“The videos of the Kharqamar incident clearly showed that they were unarmed and were allowed to enter the area,” he contended.
Afghan said that they will challenge the verdict in the high court.