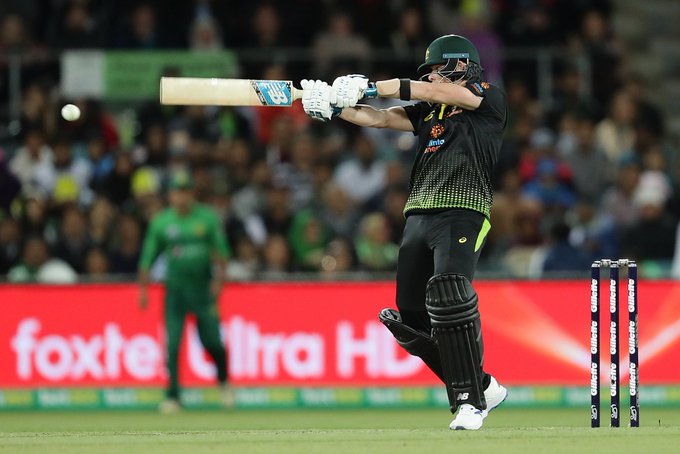 PERTH: Australia has beaten Pakistan cricket team in the final T20I of the series by ten wickets and clinched the series with 2-0.
Iftikhar Ahmed offered the only resistence as Australia’s dominant bowlers restricted Pakistan to 106 for eight in the third and final Twenty20 on Friday.
The home team won the last game in Canberra by seven wickets, thanks to a brilliant 80 not out from Steve Smith, putting them 1-0 up after the opening clash in Sydney was abandoned due to rain.
With the series on the line in Perth, Australian skipper Aaron Finch sent Pakistan into bat after winning the toss, believing there was enough in the wicket for his bowlers to cause problems.
His instinct proved right with Ahmed’s breezy 45 the only innings of note, with Kane Richardson snaring three wickets.
Skipper Babar Azam had been the standout for his team this series, hitting two consecutive 50s. But he fell early on a fast, bouncy pitch at Perth Arena, out lbw to Mitchell Starc for six.
The Australian quick then smashed the stumps of Mohammad Rizwan next ball with a searing inswinger, leaving Pakistan in trouble at 15 for two.
Opener Imam-ul-Haq, brought into the team for the out-of-form Fakhar Zaman, didn’t fare much better.
He hit two boundaries in his 14 before mis-hitting a pull shot off Sean Abbott, playing his first international since 2014, for Ben McDermott to take an easy catch.
Haris Sohail again failed, mis-timing a shot out off spinner Ashton Agar to leave the visitors struggling at 59 for four at the halfway mark.
Debutant Khushdil Shah lasted 11 balls for his eight runs before holing out to Starc off Richardson, with Imad Wasim also falling cheaply.
When the aggressive Ahmed — who also scored a quickfire 62 in Canberra — finally went looking for a boundary off Richardson, it was left to the tailenders to at least ensure their team made it into three figures.