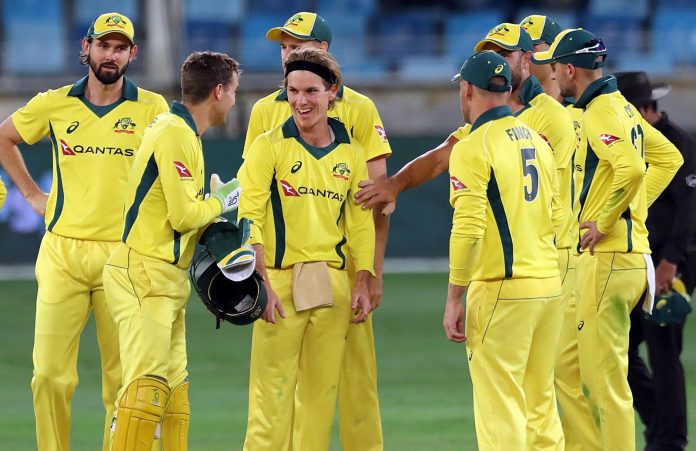 DUBAI: Australia defeated Pakistan by Pakistan in the fifth ODI by 20 runs at the Dubai International Cricket Stadium on Sunday to complete a 5-0 whitewash in the five-match series.
In response to Australia’s 328 runs target, Pakistan start strongly but fall away again in the run chase after Glenn Maxwell powers Australia to 7-327 in the series finale.
Pakistan scored 305 runs in its chase courtesy 130 runs from Haris Sohail and a half-century from skipper Imad Wasim. Middle-order batsman Umar Akmal scored 43 runs.
Australia have carried on their one-day international winning rampage, firing a warning shot to their World Cup challengers with their first 5-0 series whitewash abroad in more than a decade.
Against an admittedly depleted Pakistan outfit, the reigning 50-over world champions sealed a perfect campaign in the UAE with a complete batting performance to set up a 20-run win in Sunday’s series finale in Dubai.
Usman Khawaja (98) fell narrowly short of a third century in eight innings, before another stunning onslaught from Glenn Maxwell (70 off 33 balls) applied the finishing touches to see their side post 7-327 – the highest first-innings total of Justin Langer’s coaching tenure.
Haris Sohail’s outstanding century, his third in his last nine innings against Australia across all formats, went in vain despite Pakistan briefly appearing on track to record just the second successful 300-plus ODI run chase ever in the UAE.
But the loss of 3-17, including for Sohail for a 129-ball 130, proved decisive as Pakistan finished on 7-307.
Khawaja’s strong form sets up an intriguing battle for opening berths at the World Cup ahead of the likely return of David Warner.
The left-hander battled the effects of dehydration in sweltering desert temperatures late in his innings, slowing down considerably with a ton in sight.
In his 100th ODI, Maxwell’s maturation as an international batsman was again highlighted as he posted a third successive ODI half-century for the first time in his career to take his series run-tally to 258, statistically his best campaign since the 2015 World Cup.
He also pitched in with a wicket, taking 1-45 from 10 overs to finish as his side’s most economical bowler.
Aaron Finch (53 off 69) continued his run-fest and Shaun Marsh (61 off 68) also posted a half-century, as Australia took 107 off the final 10 overs.
With scores of 116, 153no, 90, 39 and 53 for a total of 451 runs at 113, Finch’s campaign sits behind only George Bailey (who racked up 478 in six games against India in 2013) among the most prolific bilateral series by an Australian batsman.
Jason Behrendorff (3-63 off eight overs) fought off a gastro bug that kept him out of the previous match to finish as the only multiple wicket-taker for the visitors.
Oddly snubbed from new-ball duties after a terrific opening spell two days ago, Usman Shinwari did his World Cup hopes for Pakistan no harm with a terrific spell of 4-49.
The left-armer was again a rare bright spot for the Pakistan bowling attack, removing three of Australia’s top five to ensure their total did not swell even larger.
Finch and Khawaja, yet again, set the tone after stand-in skipper Imad Wasim sent Australia into bat, putting on a 134 for the first wicket to mark the seventh time in 10 games they’ve put on at least 50 since the pair joined forces at the top of the order at the start of the recent India tour.
In an ominous sign ahead of the World Cup, the duo is this year’s top two leading ODI run-scorers.
It was Khawaja who had the greater impact in the series finale, with the 32-year-old looking certain to raise the bat before looking decidedly less assured after requiring medical treatment on 89.
The 20 balls he faced after his extended break yielded only nine runs, but his exit with 10 overs to go may have been a blessing in disguise.
Given a comical reprieve off the first ball he faced when Umar Akmal ran under what should have a been a simple catch at fine leg, Maxwell proceeded to take apart the Pakistani attack with a series of breathtaking strokes.
Four of his first seven balls went for boundaries and he later check-drove a straight six and reverse-scooped one past third man for four.
Such was Maxwell’s dominance that Shaun Marsh, who’d already reached a brisk 15th career half-century when the Victorian joined him, scored just 15 in a 60-run stand.