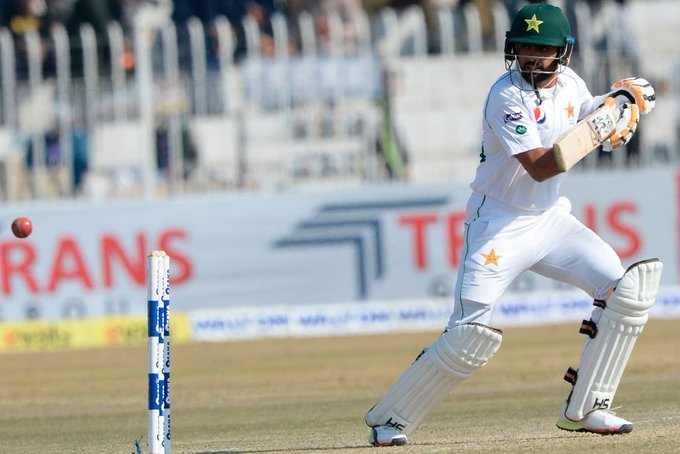 RAWALPINDI: Pakistan’s Babar Azam and Shan Masood have scored a brilliant century against Bangladesh with on the second day of the first Test in reply to Bangladesh’s first innings total of 233 at Rawalpindi stadium on Saturday.
Masood fell at 100 whereas, Babar Azam is still at crease with his marvelous century. The hosts have made 205 runs altogether with the loss of two wickets only. Pakistan need another 28 runs to overhaul Bangladesh’s total and press home for victory.
Captain Azhar Ali could secure only 34 runs with four boundaries. Record-seeking Abid Ali went for duck in the second over.
Another hundred would have equalled Indian player Mohammad Azharuddin’s unique record of three successive centuries in his first three Tests, but Abid fell way short when he was dismissed without scoring.

Also read: Shaheen Afridi destroys Bangladesh batting order, all out on 233
He edged a short and wide delivery from Bangladeshi paceman Abu Jayed into the hands of wicketkeeper Liton Das and trudged off to the pavilion heartbroken.
Masood looked in prime touch bringing up his seventh Test half century and has so far struck nine boundaries. Jayed was the most successful bowler with 2-21.
Pakistan has 80 points in the world test championship, while Bangladesh has none after losing both of its tests against India in India. Bangladesh has split its tour of Pakistan into three legs. Pakistan won the Twenty20 series 2-0 in January. After this first test, Bangladesh will return from April 3-9 for a one-off one-day international and the second test at Karachi.
Yesterday, Paceman Shaheen Shah Afridi took four wickets to help Pakistan dismiss Bangladesh for a paltry 233.
Shaheen recorded figures of 4-53 in 21.5 overs and was ably assisted by fellow pacer Mohammad Abbas (2-19) and spinner Haris Sohail (2-11) to justify Pakistan’s decision to send Bangladesh in to bat on a greenish-yellow Rawalpindi stadium pitch.
Bangladesh could have been bowled out for inside 200 had it not been for a defiant display of batting from Mohammad Mithun who top-scored with 63 including seven fours and a six in his 193-minute stand.
Bangladesh were reeling against pace at 161-6 when Mithun added an invaluable 53 run stand for the seventh wicket with Taijul Islam who made a resolute 24.
It was Sohail who had Islam caught by Yasir Shah before Pakistan wiped off the tail with the second new ball as 16-year-old Naseem Shah ended Mithun’s resistance, getting him caught behind.
Just before tea, Sohail broke a defiant 54-run stand for the sixth wicket between Liton Das (33) and Mithun as the two led Bangladesh’s fightback after the total dominance of the Pakistan bowlers in the first session.
Sohail had dropped Mithun off a luckless Yasir at wide second slip when the batsman was on 22 but compensated for the lapse with two wickets.
Yasir failed to get a wicket in 22 overs, conceding 83 runs.
Earlier, the extended two-and-a-half hour first session due to Friday prayers truly belonged to Pakistan as they kept Bangladesh down to 95-3 by lunch.
Shaheen, 19, removed debutant Saif Hassan (nought) off the third ball of the match and then had skipper Mominul Haque (30) to get vital breakthroughs for Pakistan.
Abbas trapped opener Tamim Iqbal with the 10th ball of the match for three to leave Bangladesh tottering at 3-2.
Iqbal, who last Sunday smashed Bangladesh’s highest first-class score with 334 not out in a domestic match, tried to play across but missed the ball.
Umpire Nigel Llong of England had rejected the appeal but Pakistan wisely had it reviewed and the replay showed the ball hitting the stumps.
Haque and Najmul Hossain Shanto (44) revived the innings during their third wicket stand of 59 before Haque miscued a drive and was caught behind by wicketkeeper Rizwan off Shaheen.
Haque smashed five crisp boundaries during his confident knock.
Shanto, whose previous best of 18 was against New Zealand in 2017, fell soon after lunch when he edged one from Abbas to Rizwan. He hit six boundaries.
Mahmudullah, who was shaping well with four boundaries in his 25, played a rash shot off Shaheen and was caught brilliantly at gulley by a leaping Asad Shafiq.
After this Test, Bangladesh will head home and return for a one-day international (April 3) and second Test (April 5-9) — both in Karachi.
Pakistan captain Azhar Ali said on Thursday they must reap the advantage at Rawalpindi Cricket Stadium.
“Test matches are always played on your strength and at the moment we feel our fast bowling is our strength,” Azhar said.
“They are missing a couple of key players and on current form we can say we have an upper hand. You take advantage in your home conditions.”
The Pakistan top order also cashed in, as Azhar, Abid Ali, Shan Masood and Babar Azam scored centuries at Karachi.
Abid, who also scored a century on debut in the washed out Rawalpindi test against Sri Lanka, has a chance to match former India captain Mohammad Azharuddin´s record of three centuries in his first three tests.
“We have to play our best game to beat Bangladesh,” Azhar said.
“Even though they don´t have senior players, they have (other) players who can give match-winning performances. We have to not give them a chance.”
Mominul said they were still confident even without Mushiqur.
“When you don´t have one of your best players, sometimes it´s a bit difficult, but on the other hand you can say it´s a good opportunity for a new player,” Mominul said.
“(Our) expectation is we are going to play good cricket here. We are not good enough overseas, so we have to try to improve ourselves here.”