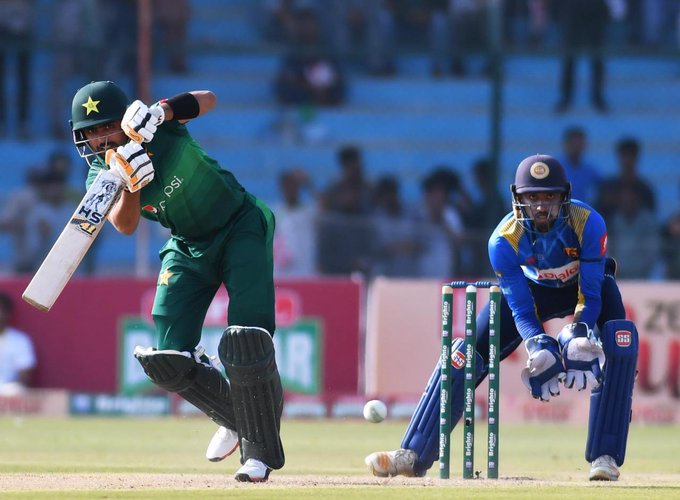 KARACHI: Babar Azam entertained the fans with an outstanding knock of 115 off 105 balls which has help Pakistan set a massive 306-run target in the second one-day international (ODI) at the National Stadium Karachi (NSK).
Wanindu Hasaranga has been the go-to bowler for Sri Lanka skipper Lahiru Thirimanne with the leg-spinner getting rid of both Pakistan openers. He first sent back Imam-ul-Haq in the 15th over and then got the big wicket of Fakhar Zaman, who departed for 54 off 65 balls.
After starting strong, Pakistan lost their first wicket in the 15th over, when Imam-ul-Haq (31 off 41) was trapped leg before wicket by Wanindu Hasaranga.
Fakhar Zaman (54 from 65) was next to go, getting caught by Isuru Udana off Hasaranga in the 21st over.
Haris Sohail (40 off 48) became the casualty of a run out off Nuwan Pradeep’s bowling in the 40th over.
Skipper Sarfaraz Ahmed was run out after scoring eight runs and Babar Azam, who smashed a 105-ball 115, was caught off Lahiru Kumara in the 46th over.
Imad Wasim was caught out after contributing 12 runs and Wahab Riaz (2) was run out at the non-striker’s end on the last ball of the innings. Pakistan thus ended their batting with 305-7 at the end of the 50 overs.
After the long-awaited first ODI was called off due to heavy rain in the metropolis, Pakistan and Sri Lanka are slugging it out today in the second fixture of the originally scheduled three-match series.
The second ODI, which was originally scheduled for Sunday, was rescheduled for today and the third match will be played on Wednesday.
Today’s match is the first ODI being played in Karachi after a yawning gap of exactly 3,901 days, equivalent to 10 years, eight months and six days.
The two teams will also play three Twenty20 internationals in Lahore next month.
Teams:
Pakistan: Fakhar Zaman, Imam-ul-Haq, Babar Azam, Haris Sohail, Iftikhar Ahmed, Sarfaraz Ahmed (capt, wk), Imad Wasim, Shadab Khan, Wahab Riaz, Mohammad Amir, Usman Shinwari
Sri Lanka: Lahiru Thirimanne (capt), Sadeera Samarawickrama (wk), Danushka Gunathilaka, Avishka Fernando, Oshada Fernando, Shehan Jayasuriya, Dasun Shanaka, Isuru Udana, Wanindu Hasaranga, Nuwan Pradeep, Lahiru Kumara