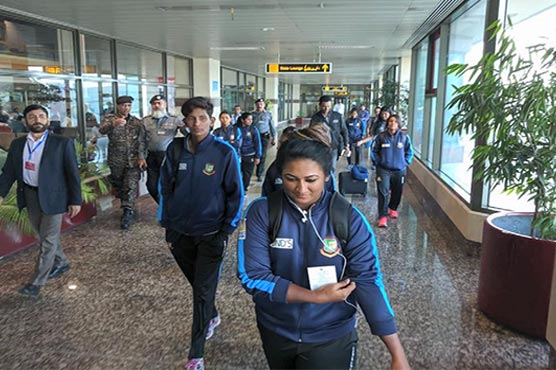 LAHORE: Bangladesh women cricket team have on Wednesday reached Pakistan to play three Twenty20 International (T20I) matches and two one-day internationals (ODIs) against the Green Shirts.
The visitors were warmly welcomed at the Allama Iqbal International Airport, Lahore. The players were escorted to their hotel amidst beefed up security. The series starts with the opening T20I at the Gaddafi Stadium on 26 October.
On the other hand, the women selection committee led by Urooj Mumtaz today announced the Pakistan team, said a media release by the Pakistan Cricket Board (PCB).
The team was finalised keeping in view the performance of the players in the training camp that concluded in Muridke on Tuesday, while the core of the squad that has represented Pakistan recently was also retained. Former Pakistan players Asmavia Iqbal and Marina Iqbal are the other two members of the selection panel along with Urooj.
Chief Selector Urooj Mumtaz said: “We are delighted to host the Bangladesh team and look forward to an exciting series. It is the first international assignment for the team since the tour to South Africa in June. The team is a good blend of experience and young exciting players.
“With the women s game developing at a rapid pace, we aim to play a positive and aggressive brand of cricket and produce solid performances. The primary focus will remain on winning as it will build confidence within the group, this is pivotal for us as we head into a busy international schedule over the next six months. During the series we would also like to give an opportunity to some emerging players, so that they can experience the aura around international cricket and its pressures.”
Bismah Maroof (captain), Aliya Riaz, Anam Amin, Ayesha Zafar, Diana Baig, Iram Javed, Javeria Khan, Kainat Imtiaz, Nahida Khan, Omaima Sohail, Saba Nazir, Sadia Iqbal, Sana Mir, Sidra Amin and Sidra Nawaz.