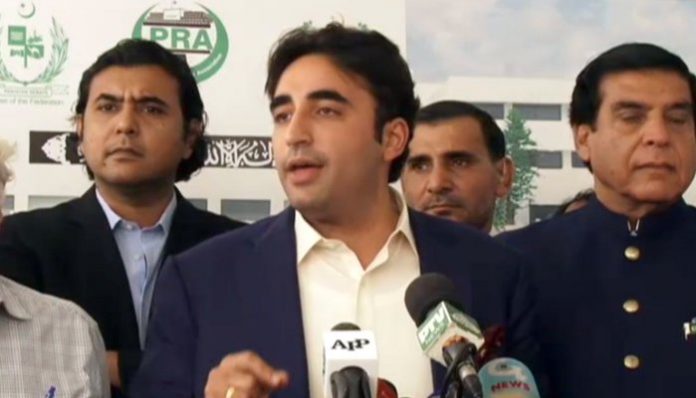 ISLAMABAD: PPP Chairman Bilawal Bhutto-Zardari appeared before the National Accountability Bureau (NAB) today for a hearing regarding a case related to the company JV Opal 255.
PPP Senator Mustafa Nawaz Khokar had confirmed Bilawal’s appearance before the accountability bureau.
“Chairman PPP Bilawal Bhutto Zardari will appear before the NAB despite the fact that the NAB notice to him is just political victimisation. The PPP chairman believes in the supremacy of the law of the land,” Khokar said.
Khokar noted that NAB sent Bilawal a notice within the week after he protested against the the PTI’s ‘anti-poor’ economic policies.

Also read: Bilawal urges PTI govt to terminate agreement with IMF
“NAB sends a notice to Bilawal whenever he criticises the government,” he alleged.
“The Supreme Court has already declared Bilawal innocent. This is nothing but political victimisation by NAB,” he added.
The PPP chairman will record his statement with regard to the alleged transfer of over Rs1 billion from the accounts of JV Opel-225, according to The News.
This is not the first time the accountability watchdog has summoned the PPP chairman for questioning.
The NAB had earlier summoned him last year on May 29 to record his statement in the money laundering case. He had also been summoned on May 17 in relation to the Park Lane case.
The case against Bilawal for which he has been summoned relates to a company titled JV Opal 225. The company is a joint venture between the Zardari Group Pvt. Ltd — of which Bilawal is a director — and a large real-estate business.
JV Opal was set up in 2011 and had its office on a property in Karachi owned by the Zardari Group. From 2011 to 2013, the company did not generate any revenue, yet it purchased major assets, agriculture lands, commercial and residential properties in Islamabad and Karachi, according to a joint investigation team (JIT) report.
The only amount it received, during this period, was Rs1.2 billion from its business partner, the real-estate firm, which, according to the JIT report, was not due to the Zardari Group.
The investigators suspect that this payment was made by the real-estate company as a bribe or kickback for getting favours from the Sindh government in the form of illegal allotment of state land.
While the JIT has not been able to make a direct link between the Bhutto scion and the fake accounts, it states that money stashed in these fictitious bank accounts was used to pay the water and sewerage bill of the Bilawal House; an amount to a restaurant that catered an event; to purchase airplane tickets for Bilawal and his younger sister; and to renovate his bomb-proof container and bullet-proof vehicles.
Talking to media after appearing before NAB, the PPP chief said that if he is arrested then his sister Aseefa Bhutto Zardari would lead the campaign against the government which his party is set to launch on March 5.
“If I get arrested then Aseefa Bhutto-Zardari would be my voice,” stated the young PPP chairman, adding that his party knows how to struggle.
Bilawal claimed that he was asked to appear before the anti-corruption watchdog today because of the announcement of his campaign against the incumbent government over inflation.
“When we announced in Karachi to launch a campaign against the economic conditions in the country, I was sent a notice all of a sudden,” stated the PPP leader.
Bilawal reminded reporters that over a year ago, he was declared innocent of any crime by the former chief justice of Pakistan Asif Saeed Khosa. He added that despite this, he presented himself before the authorities.
The PPP chairman shared that in the past he had answered the questionnaires sent by the anti-corruption watchdog. He added that the last questionnaire was sent to him in May of last year and he had responded to all the questions asked of him.
“They had no contradictions or questions since May when I responded to their questionnaires,” stated Bilawal.
The lawmaker from Larkana stated that his party respected the rule of law and the institutions “even when they are wrong”, adding that this was why he appeared before the bureau despite his objections.
“I am being called for an accusation when they know that I was never involved in any business activity. Even if I was involved, then it would be a private transaction between two companies,” noted Bilawal.