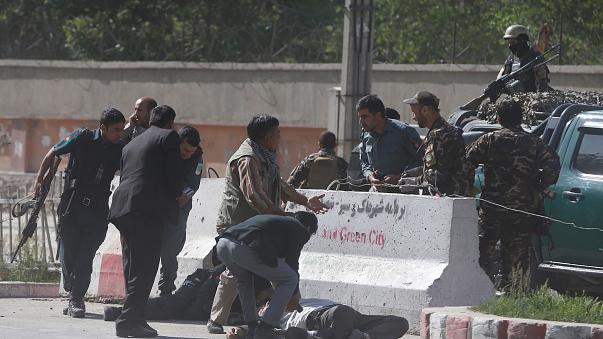 JALALABAD: At least 16 people were killed and 30 others injured in a suicide explosion in Jalalabad city, the provincial capital of eastern Nangarhar province of Afghanistan.
According to Afghan media, a suicide bomber has detonated his explosives among the Taliban, security forces, and the ordinary civilians who had gathered near the governor’s office to celebrate Eid and ceasefire.
Provincial governor’s spokesman Ataullah Khogyani confirmed the incident and said a number of people have been killed or wounded in the explosion.
In the meantime, a security source said at least sixteen people have been killed and at least thirty others have sustained injuries in the attack.
No individual or group has so far claimed responsibility behind the incident.
Meanwhile, the Taliban said Sunday they would not extend their three-day ceasefire with Afghan security forces and fighting would resume, dashing hopes for the recent peace to continue. The comments by Taliban spokesman Zabihullah Mujahid come after Afghan President Ashraf Ghani announced Saturday a government truce with the militants would be extended. He asked the group to reciprocate.
“The ceasefire ends tonight and our operations will begin, inshallah. We have no intention to extend the ceasefire,” Mujahid told AFP in a WhatsApp message. The first formal, nationwide ceasefire in the country since the 2001 US invasion had been met with jubilation across the country as Afghans — Taliban, security forces and civilians — celebrated Eid, the holiday that caps the fasting month of Ramadan.– Agencies