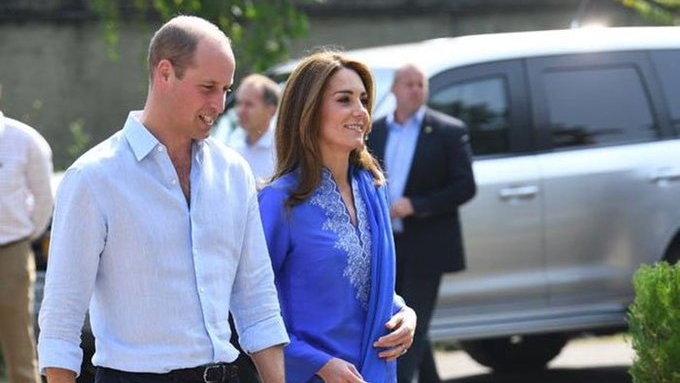 ISLAMABAD: The Duke and Duchess of Cambridge, Prince William and Kate Middleton, on the fourth day of their tour of Pakistan arrived in Lahore.
Upon arrival in the provincial capital, the royal couple was warmly received by Punjab Chief Minister Usman Buzdar and Governor Chaudhry Sarwar at the Allama Iqbal International Airport.
The royal visit comes 13 years since Prince Charles and his wife Camilla – the Prince of Wales and the Duchess of Cornwell – toured the country in 2006. Pakistan still vividly remembers the late Princess Diana’s visit in 1996.
Their itinerary for the day-long trip includes visits to the SOS Children’s Village, Shaukat Khanum Memorial Cancer Hospital and Research Centre, the National Cricket Academy and the Badshahi Mosque. The historic Badshahi Mosque was built by Mughal Emperor Aurangzeb Alamgir in 1673.
The duchess is also likely to deliver her first address in Pakistan today.
William’s late mother, Diana, who was a friend of Prime Minister Imran Khan, visited Pakistan twice – 1996 and 1997 – to help raise awareness and funds for the Shaukat Khanum Memorial Cancer Hospital.
Prince William and Kate Middleton will hold separate meetings with Governor Chaudhry Muhammad Sarwar and CM Buzdar during their visit.
On Wednesday, Prince William and his wife Kate flew near the Afghan border to visit a remote Hindu Kush glacier, after a morning spent trying on feathered traditional caps and luxurious shawls in Pakistan s mountainous north.
The British royals travelled by helicopter to a glacier in Broghil Valley National Park to see the effects of climate change in one of the most glaciated areas of the world.
Residents of the region have been sounding the alarm over its melting glaciers, which caused devastating floods in 2015 that left thousands of families camping in the open just as another cold winter approached.
The Duke of Cambridge called the glacial melt an “impending catastrophe” in a speech delivered at a glittering reception in Islamabad late Tuesday.
The couple met with environmental experts to discuss the melting before going on to spend their afternoon with the Kalash.
The verdant, plunging valleys of the northern Chitral district have long attracted tourists for their natural beauty and their brush with legend as the home of the Kalash, who claim ancestry from Alexander the Great.
Activists have campaigned to preserve the traditions of the diminishing tribe, now estimated to number around only 3,000 people, making them Pakistan s smallest religious minority.
Earlier, during a refuelling stop on the way to the glacier, the Duke and Duchess tried on a Chitrali cap given a touch of luxury with a peacock feather, which local media said was a gift to them from residents.
The flat, woollen hats, also known as “pakols”, are popular in northern Pakistan and throughout Afghanistan, though feather decorations are usually reserved for special occasions.
They also tried on chapans, long bulky embroidered coats popular in Central Asia; as well as a lush woolen shawl for Kate.
On Tuesday, the royal couple was warmly received by the premier, who hosted a special lunch for the royal guests at Prime Minister’s House.
Prior to meeting with the prime minister, the couple was welcomed by President Arif Alvi and his wife Samina Arif at Aiwan-i-Sadr.
The Duchess of Cambridge, who was earlier dressed in a royal blue kurta while visiting a girls school, changed into a green and white attire for the formal receptions.
The royal couple was accompanied by Thomas Drew, the British High Commissioner to Pakistan; Simon Case, the Principal Private Secretary to the Duke; and Christian Jones, the Communications Secretary to the Duke and Duchess of Cambridge.
The president appreciated the royal couple for their endeavors to raise awareness about mental health, climate change, and poverty alleviation, said a press release by the president’s secretariat.
Prince William expressed his gratitude to the president for the warm welcome and hospitality extended to him and his entourage. The royal couple lauded the initiatives undertaken by Pakistan’s government to combat climate change and to alleviate poverty, added the statement.
The official statement also said that throughout the tour the couple would visit programmes which empower young people and see how communities in Pakistan are responding and adapting to the effects of climate change.