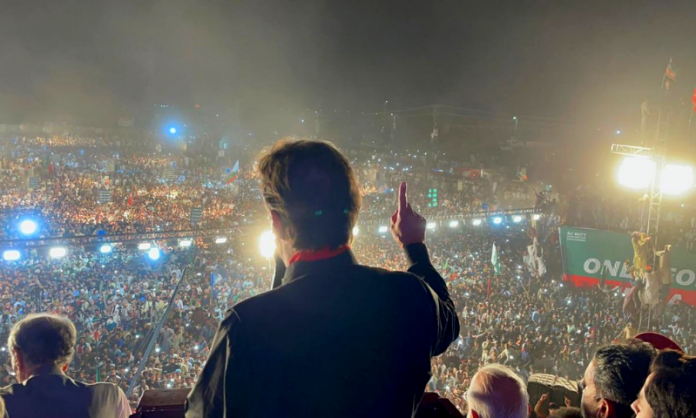 Pakistan Tehreek-e-Insaf Chairman Imran Khan has pulled a huge crowed in Peshawar Jalsa last night, the first since he was voted out by the National Assembly through no trust motion.

The rally witnessed a good turnout of people comprising a huge number of PTI workers and common people in the provincial capital.

Speaking to the charged crowd, Mr. Khan asked the judiciary to explain why it felt the need to open its doors at midnight on Saturday, hours before he was ousted from the prime minister’s office.

Its a “decisive moment” for Pakistanis, the nation needs to choose if it wants slavery or liberty. “Do we want to be the slaves of the US’ slaves or do we want real freedom?”,  ousted prime minister told to enthusiastic crowed.

It was the Imran Khan first public address since losing his government. The political analysts and journalists say it brook previous records of a crowd at a political rally in Peshawar.

Iftikhar Firdous, a senior journalist from Peshawar, posted a video on social media with a caption saying it is quite a power show, considering the comparison with the previous gathering before Imran Khan was ousted from office. There were families in cars who couldn’t make it to the ground.

Quite a power show by PTI in #Peshawar.. considering the comparison with the previous gathering before Imran Khan was ousted from office. There were families in cars who couldn’t make it to the ground. pic.twitter.com/jEskZ1U7VU

The PTI workers on social media also claimed that thousands were walking on roads trying to enter to the venue but they could not make their way as there were no place inside the ground.  They believe that PTI will make comeback to power with two third majority in the center.

For those who’re saying that it was just a small type of gathering and were roughly some hundreds os people.Have a look at the aerial view of Peshawar jalsa it’s just wow.@ImranKhanPTI you already won❤️❤️ #پشاور_جلسہ_عام #امپورٹڈ_حکومت_نامنظور
#Peshawar pic.twitter.com/LHjmrZDL24

Imran Khan thanked the people of Peshawar for a mammoth welcome and coming out on roads against he says is US conspiracy.

Though Imran Khan pulling out huge crowed on roads and in rallies, the political experts have different opinion on his “freedom struggle”.