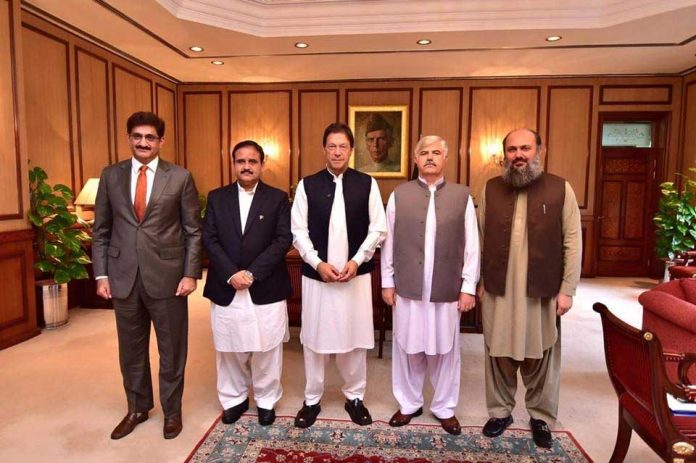 ISLAMABAD: A meeting of the Council of Common Interests (CCI) was held in Islamabad today with Prime Minister Imran Khan in the chair.
The meeting deliberated on a seven-point agenda including the issues of energy and water.
According to the Ministry of Inter-Provincial Coordination, the meeting discussed import of Liquefied Natural Gas, launching a countrywide cleanliness drive and setting up a task force for streamlining regulatory functions.
The Petroleum, Exploration and Production Policy 2012 and matters pertaining to Workers Welfare Fund and Employees Old-Age Benefits Institution also came under discussion during the meeting.
Punjab Sardar Usman Buzdar, Chief Minister Sindh Syed Murad Ali Shah, Chief Minister Khyber Pakhtunkhwa Mehmood Khan and Chief Minister Balochistan Jam Kamal Khan besides the Minister for Inter-Provincial Coordination Dr Fehmida Miraz and Minister for Finance Asad Umer attended the meeting.
During the session, chief ministers also apprised the council of recommendations and issues. According to reports, Prime Minister Khan assured the chief ministers that the provinces would be taken into confidence on all important national matters.
“The nation will proposer from strong contact and harmony between the centre and provinces,” the prime minister said.
The Prime Minister stressed on making provinces more autonomous and the need to make sure that the distribution of resources was transparent.
The prime minister also took the council into confidence on the new local government system and comprehensive reforms.