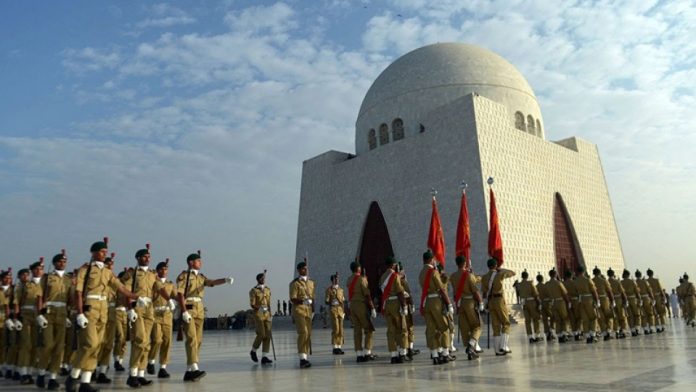 KARACHI: Change of guard ceremony was held at the mausoleum of Quaid-i-Azam Mohammad Ali Jinnah in Karachi on the occasion of his 142nd birth anniversary.
A smartly turned out contingent of Pakistan Military Academy (PMA) cadets , clad in ceremonial dresses, presented the guard of honour and assumed ceremonial guard duties with traditional spirit and enthusiasm.
The 142nd birth anniversary of the father of the nation Quaid-e-Azam Muhammad Ali Jinnah is being celebrated across the country with national zeal and fervour today (Tuesday).
A huge number of people visiting to the Mazar-e-Quaid in Karachi to pay homage to the father of the nation, witnessing change of guard ceremony.