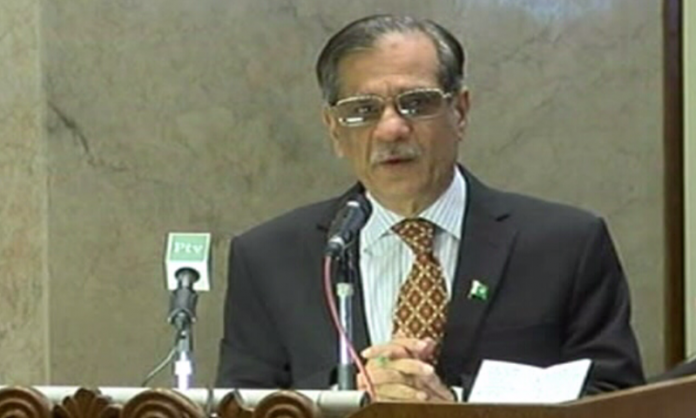 LAHORE: Chief Justice of Pakistan (CJP) on Saturday has clarified that no step against the supremacy of the Constitution will be tolerated.
Addressing a ceremony, the top judge said that Pakistan enjoys best democratic system and that taking suo motu actions for the resolution of public issues is responsibility of the judiciary.
Earlier today, CJP threatened to resign as lawyers staged protest during the hearing of sub-inspector torture case.
Lahore Bar secretary Sohail Arshad pleaded before the Supreme Court (SC) to dispose of FIR lodged against the lawyer as he did not assault the policemen.
The top judge rejected the request and said that he will tender resignation if he fails to ensure justice. He also reprimanded the lawyers for chanting slogans in the courtroom.
Meanwhile, the Lahore Bar secretary said that they will continue to protest outside the court if the CJP won’t dismiss FIR against the fellow lawyer.