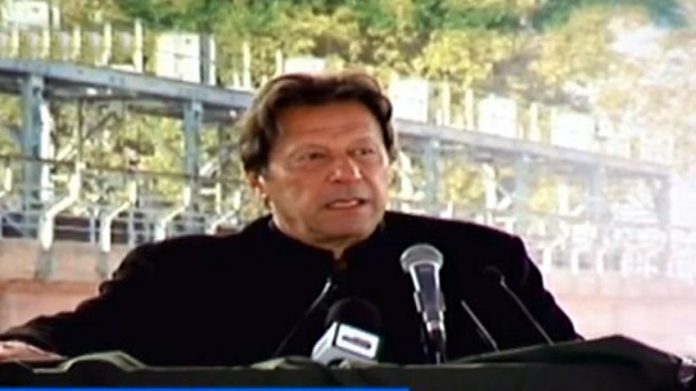 PIND DADAN KHAN: Prime Minister Imran Khan said on Thursday that Chief of Army Staff (COAS) Gen Bajwa had assured him “Pakistan Army was ready for India” in case of an attack on Azad Kashmir.
The prime minister was addressing a Pakistan Tehreek-e-Insaf (PTI) rally in Pind Dadan Khan where he slammed Indian Prime Minister Narendra Modi for his government’s controversial Citizenship Amendment Act (CAA).
“I am telling you now, he will use this [protests in India] to do something in Azad Kashmir,” said the prime minister. “I informed Gen Bajwa about this and he told me that Pakistan Army is ready for India.”
Prime Minister Imran said that Modi had thousands of Muslims massacred in Gujarat and was also responsible for injuring thousands of Kashmiris in the occupied valley through pellet guns.
“I want you to listen to my prediction. The people of India will stand up against Modi. Not only Muslims but Hindus, Sikhs and Christians,” he said. “They know that what he is about to do in India is the same what Hitler did 60-70 years ago against the Jews.”
The prime minister said that 2020 will be the year of progress for Pakistan. He admitted that the current year had proven difficult for the poor.
“The next year will be one of progress for Pakistan,” he said. “It will be a year when jobs will be given to people.”
The prime minister credited his government’s policies, saying that exports and remittances were both on the rise. He said that Pakistan had to pay off money that it collected from taxes to international donors as it had sought heavy loans from them.
“In 2019, we stabilised our economy,” he said. “God willing, 2020 will be the year when prosperity will come to Pakistan.”
He lashed out at political opponents for wasting Pakistan’s resources when they were in government. Prime Minister Imran said that not everyone could bring about reform because “the corrupt mafia stands in your way.”
“Some people [political opponents] fear that if this government succeeds, they will go to jail,” he said. “Some journalists made money and derived other benefits from the old system are also against our government.”
He said that “a bad time is about to come” for the corrupt mafia in the country. The prime minister took an indirect dig at opposition leaders by saying that those who had gathered at the container against him to save their looted wealth will once again feel the sting as the government will take action against them.