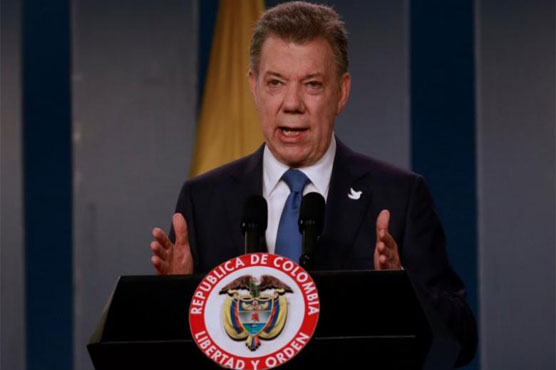 OSLO: Colombian President Juan Manuel Santos won the Nobel Peace Prize Friday for his “resolute” efforts to end more than five decades of war in his country, despite voters’ shock rejection of a historic peace deal.
The award came as a surprise after voters rejected the terms of a historic deal Santos reached last month with FARC rebel chief Rodrigo Londono, alias Timoleon “Timochenko” Jimenez, after nearly four years of talks.
“The Norwegian Nobel committee has decided to award the Nobel Peace Prize for 2016 to Colombian President Juan Manuel Santos for his resolute efforts to bring the country’s more than 50-year-long civil war to an end,” said committee chairwoman Kaci Kullmann Five.
The deal, which was signed on September 26, was supposed to be ratified following an October 2 referendum but in a shock development, voters shot down the agreement, leaving the country’s future hanging in the balance.
The announcement caught most Nobel watchers off-guard, with most experts saying that the referendum had torpedoed Colombia’s chances of winning.
The Norwegian Nobel Committee said the aim was to encourage peace efforts in the war-torn country, which are now in “real danger” of collapse.
“We hope that it will encourage all good initiatives and all the parties who could make a difference in the peace process and give Colombia — finally — a peace after decades of war,” Kullman Five said.
The Colombia conflict has killed more than 260,000 people and left 45,000 missing over five decades, drawing in several leftist guerrilla groups, right-wing paramilitaries and drug gangs.
Under the terms of the deal, FARC, the oldest and largest rebel group, was to relaunch as a political party.
Asked why the prize had not been jointly awarded to the FARC leader, Kullman Five declined to answer, saying: “We will never comment on other candidates and other possibilities.”
The committee said the award was also “a tribute to the Colombian people” who had not given up hope of a just peace as well as to the families of the “countless victims” of the war.
The people’s rejection of the terms of the deal followed a successful campaign by rightwing hardliners angered by the offer of impunity for the Marxist rebels.
And with the ceasefire due to expire at the end of the month, the country is now teetering on the brink — of either war or peace.
Santos, who has staked his legacy on making peace, has warned that Colombia is now in a “very dangerous limbo” in a warning echoed by the Norwegian committee.
“There is a real danger that the peace process will come to a halt and that civil war will flare up again,” Kullmann Five said.
“This makes it even more important that the parties, headed by President Santos and FARC guerrilla leader Rodrigo Londono, continue to respect the ceasefire.”
Nobel watchers had initially tipped Santos and Timochenko as likely winners of the prestigious prize but quickly revised their predictions after the referendum, saying such an award would be perceived as flying in the face of the will of the Colombian people.
The Norwegian Nobel committee has in the past awarded the prize to those involved in peace efforts which had yet to bear fruit, with the express aim of encouraging them.
FARC leaders have vowed they are committed to making peace, but it is unclear whether they will be able to sell a new deal to the rank and file.
“Peace in Colombia is close, and we will achieve it,” Santos said in a national address on Wednesday.
The peace prize is the fourth Nobel to be announced this week.
On Monday, Yoshinori Ohsumi of Japan won the medicine prize for his pioneering work on autophagy, a process whereby cells “eat themselves” which can result in Parkinson’s and diabetes when disrupted.
And on Tuesday, the physics prize went to British scientists David Thouless, Duncan Haldane and Michael Kosterlitz for their work on “topology”, a highly specialised mathematics field studying unusual phases or states of matter.
Wednesday’s chemistry prize went to Jean-Pierre Sauvage of France, Fraser Stoddart of Britain and Bernard Feringa of the Netherlands for developing the world’s smallest machines that may one day act as artificial muscles to power tiny robots or even prosthetic limbs.
The economics prize will be announced Monday, and the 2016 Nobel season will end on Thursday with the literature prize, which is being presented a week later than normal.
The peace prize is a gold medal, a diploma and a cheque for eight million Swedish kronor (around $932,000 or 831,000 euros) which will be presented at a ceremony in Oslo on December 10, the anniversary of the 1896 death of prize creator Alfred Nobel, a Swedish philanthropist and scientist. …Agencies