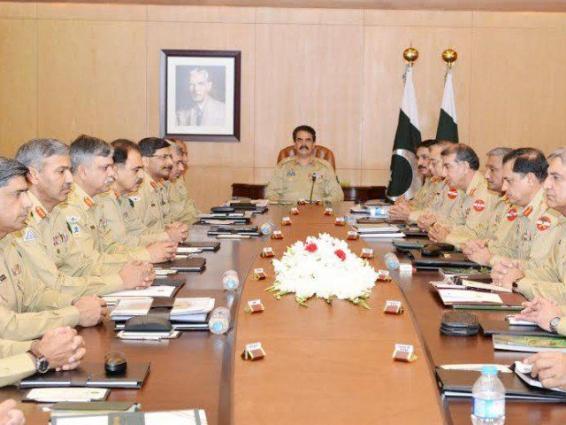 RAWALPINDI: The Corps Commanders Conference chaired by Chief of Army Staff (COAS) General Raheel Sharif here on Thursday reviewed country’s internal and external security situation at General Headquarters (GHQ) in Rawalpindi.
The conference was chaired by Chief of Army Staff (COAS) General Raheel Sharif. The conference reviewed the ongoing operation Zarb-e-Azb and military operations across the country to eliminate terrorism. The conference reviewed military offensives in Shawal valley and crackdown against militants across the country.
According to a statement by Inter-Services Public Relations (ISPR) the corps commanders also took up the matter of professional readiness of Pakistan army during the meeting. They expressed their satisfaction on steps being taken to curb terrorism.
The conference was briefed over the anti-state activities of enemy countries to destabilize Pakistan. The military leadership has resolved to take all measures to block hostile acts against Pakistan, which can undermine the security and progress of the country, Inter Services Public Relations said. The participants agreed to take every possible steps to curb the anti-state activities of enemy countries in Pakistan.