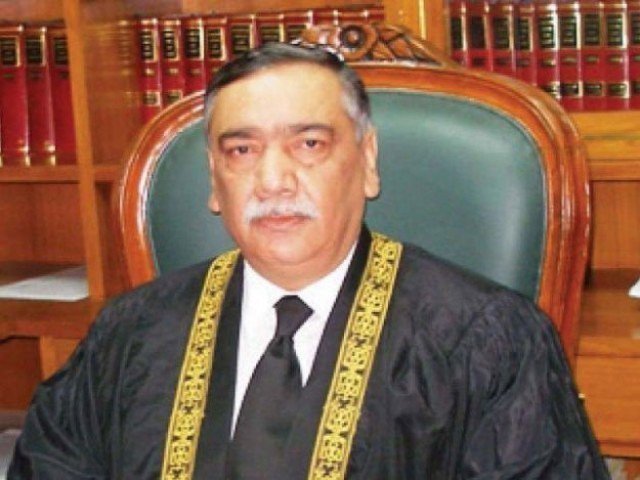 ISLAMABAD: Chief Justice of Pakistan (CJP) Justice Asif Saeed Khosa on Monday remarked that they are curbing false testimonies starting today and if even a part of a testimony is based on lies it will be rejected.
ASI Khizer Hayat appeared in the Supreme Court as it heard a case regarding a false testimony.
Censuring Hayat for giving a false testimony in a case, the chief justice stated, “You were working at Wahdat Colony in Lahore and gave a testimony for a murder in Narowal. It is wrong to give a false testimony under oath.”
“You took God’s name and said that if you lie God’s wrath may fall upon you and maybe now is the time that God’s wrath has fallen upon you. According to the police record, you were on holiday and lied in your testimony. The high court also said that you lied,” the top judge added.
At this, Hayat’s counsel said, “It was the day of Eid.” Justice Khosa then remarked, “Does Eid day mean that you are permitted to lie?”
The chief justice further said, “As per the law, life imprisonment must be awarded to those who give false testimonies. From today, March 4, 2019 we are starting the journey of truth. All witnesses should know that even if a part of a testimony is based on lies it will be rejected. We are curbing false testimonies from today and starting from this witness who lied.”
Islam also states that if a part of a testimony is based on lies it should be rejected, he added. “In 1964, the Lahore High Court judge had given a concession on this matter. The point of the concession was that people lie here anyway so if they want justice they should speak the truth,” the top judge said.
“False testimonies have destroyed the system,” he stated.
The court then transferred the case to sessions court in Narowal and ordered an inquiry against Hayat under Article 1994.
On February 13, the Supreme Court had summoned Hayat while hearing a case. The court had taken notice of Hayat’s false testimony on the appeal of murder suspect Muhammad Ilyas. Muhammad Ilyas, who was accused of killing a man named Asif in Narowal in 2007, was acquitted over lack of evidence against him. A trial court had awarded the death sentence to Muhammad Ilyas.