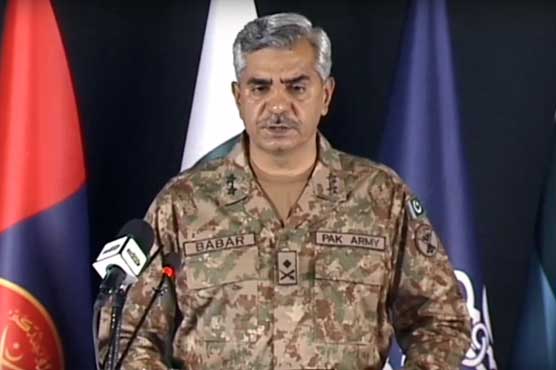 ISLAMABAD: Director General of Inter-Services Public Relations (ISPR) Major General Babar Iftikhar has said that the situation on the Line of Control (LoC) is concerning and if India does not stop playing with fire, it will be responsible for the ramping up of military escalation.
Talking to a private TV channel, the Pakistan Army spokesman said that the Pakistan Army was responding appropriately to India at the LoC and it has shot down several of India’s quadcopters for violating our boundary.
The DG ISPR said that human rights were being grossly violated in India and it wants to divert all attention towards the Line of Control and Pakistan through military adventurism. He said that if the adversary shows any aggression, there should be no doubt that we are ready to give a befitting reply.
During the interview, Maj. Gen. Babar Iftikhar said that India has faced great embarrassment on various fronts, with it struggling against coronavirus spreading rapidly and the economy also feeling its effects.
The spokesman said that India also faced embarrassment on the issue regarding map of India-Nepal border. The rise of Islamophobia has sweeped across the world, particularly India, and it wants to divert attention away from the situation by orchestrating something along the LoC.
During the interview, the DG ISPR said that India’s biggest orchestration was staging Pulwama 2, destroying the vehicle in broad daylight so that no evidence could be found, all this is India setting up the stage for something else.
He further said that the whole world is watching the atrocities being committed in Kashmir, the Indian army is martyring Kashmiris to suppress the protests in occupied Kashmir, not even sparing a 7-year-old child.
Major General Babar Iftikhar said that Indian senior military leadership accuses Pakistan of harboring terror launching pads, but the UN observer group has complete freedom to go anywhere on the Pakistan side of the border and refute Indian claims. Pakistan has taken international media for visits to the LoC many a time, he added.
The Pakistan Army spokesman said that Pakistan has never denied access to observers as well as international media, if India also gives access to UN observer group and the international media in occupied Kashmir, things will be clarifed. He said that producing evidence of what India alleges should not be a problem in this day and age.
He warned India to not play with fire as any military adventure will have serious consequences, saying Pakistan is ready and it will respond with full force. He said that the enemy country must realize that no side will be able to control the consequences following any military adventure.