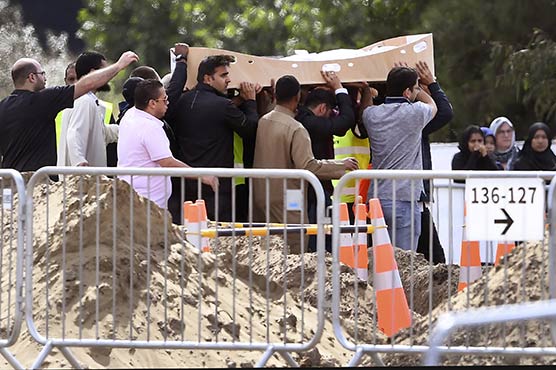 CHRISTCHURCH: At least 27 out of 50 martyrs who lost their lives in Christchurch mosques attack have been buried so far.
According to details, eight Pakistanis were also among those buried.
On the other hand, Muslim call to prayer rang out across New Zealand on Friday followed by two minutes of silence nationwide to mark a week since a white supremacist gunned down 50 people at two mosques in the city of Christchurch.
As the call was broadcast around the country, thousands of people — including Prime Minister Jacinda Ardern — stood silently in a park opposite the mosque where the killing began, as the country of 4.5 million came to a standstill.
The massacre by alleged shooter Brenton Tarrant has shocked a nation known for its tolerance.
It has prompted horrified Kiwis to respond with vigils and performances of the traditional Maori haka dance, and to form lines behind Muslims to symbolically protect them while they pray.
Al Noor imam Gamal Fouda then took to the lectern to denounce hatred, but also to praise the sense of Kiwi togetherness that the killings have sparked.
“I look out and I see the love and compassion in the eyes of thousands of fellow New Zealanders and human beings from across the globe,” he said.
“This terrorist sought to tear our nation apart with an evil ideology that has torn the world apart. But, instead, we have shown that New Zealand is unbreakable.”
Many women in attendance wore headscarves in solidarity with New Zealand s Muslim community.