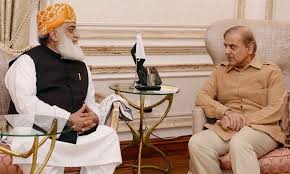 LAHORE: President Jamiat Ulema-e-Islam (F) Maulana Fazl-ur-Rehman held a meeting President Pakistan Muslim League-Nawaz (PML-N) Muhammad Shahbaz Sharif in Lahore on Sunday.
During the meeting, the two leaders discussed strategy regarding the upcoming presidential election.
Molana Abdul Ghafoor Haideri and Akram Khan Durrani accompanied the JUI-F chief, while PML-N’s Khawaja Saad Rafique, Sardar Ayaz Sadiq and others were also present in the meeting.
Later talking to newsmen, Maulana Fazl-ur-Rehman said efforts are being made to bring the opposition on same page.
Speaking on this occasion, PML-N leader Khawaja Saad Rafique said all political parties except PPP will cast their vote to Maulana Fazl-ur-Rehman in upcoming Presidential elections.
He said the current political situation of the country should be a matter of concern for Co-Chairman PPP Asif Ali Zardari and Chaudhry Aitzaz Ahsan.