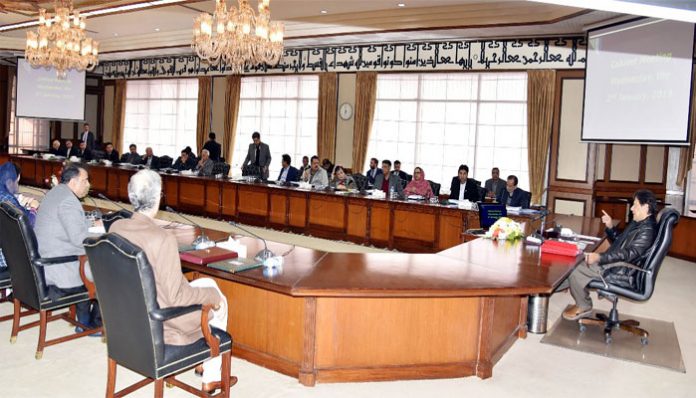 ISLAMABAD: Prime Minister Imran Khan on Thursday chaired meeting of the Federal Cabinet at PM’s Office.
The Cabinet praised the armed forces for their calibrated response to the Indian aggression which was designed to give a message that though Pakistan has the capability, it does not intend to harm innocent civilians or cause undue damage.
Lauding Prime Minister’s speech, as of a statesman, the cabinet expressed the hope that sanity would prevail on Indian government and leadership so that regional peace is not jeopardized.
The Cabinet reaffirmed Pakistan’s firm commitment to peace and stability while fully protecting its sovereignty, preserving its territorial integrity and responding with full force in case of any external aggression.
The Foreign Minister briefed the Cabinet about his engagements with Foreign Minister of China, Saudi Arabia, Turkey, Iran and other world leaders on the current situation.
The Cabinet appreciated the efforts of the Foreign Minister and the Ministry of Foreign Affairs towards highlighting Pakistan’s principled stance and its efforts to deescalate the situation.
The Cabinet ratified the decisions taken by Cabinet Committee on Energy (CCoE) and the Cabinet Committee on Privatization (CCoP) in their meetings.
Decisions of Economic Coordination Committee (ECC) during its meeting held on February 19 and Cabinet Committee for Disposal of Legislative Cases (CCLC) in its meeting Feb 26 were also ratified.
The Cabinet granted exception to FIA from the provision of PPRA Rules 2004 for the expenditures of JIT, formed by Supreme Court of Pakistan to probe fake/benami accounts, for facilitating its day to day working including hiring of foreign/local experts and for timely completion of the probe.
The Cabinet approved signing of Framework Arrangement amounting to $ 500 million with Republic of Korea.
Approval for signing of Memorandum of Understanding (MoU) between the Committee on Financial Monitoring of the Ministry of Finance of the Republic of Kazakhstan (FIU of Kazakhstan) and Financial Monitoring Unit (FMU) of Government of Pakistan concerning cooperation in the exchange of financial intelligence related to money laundering and terrorist financing was granted.
The Cabinet approved appointment of Chairman and Directors of the Board of Directors of National Bank of Pakistan.
Zubyr Soomro has been appointed as Chairman National Bank of Pakistan.
Memorandum of Cooperation between the Ministry of Justice of the Republic of Uzbekistan and the Ministry of Law & Justice of the Islamic Republic of Pakistan was approved by the Cabinet.
The Cabinet also reviewed the progress on disposal of state properties owned by various ministries/departments. It was decided to expedite the process so as to ensure optimum utilization of dead properties and also to raise much needed finances for projects of public welfare.
The Prime Minister, during the meeting, also apprised the Cabinet about the decision to permit construction of high rise building in the Federal Capital.
The Prime Minister said that emphasis on vertical structure was need of the hour in view of increased population and fast depleting green belts especially in major cities of the country. The Cabinet ratified the same.