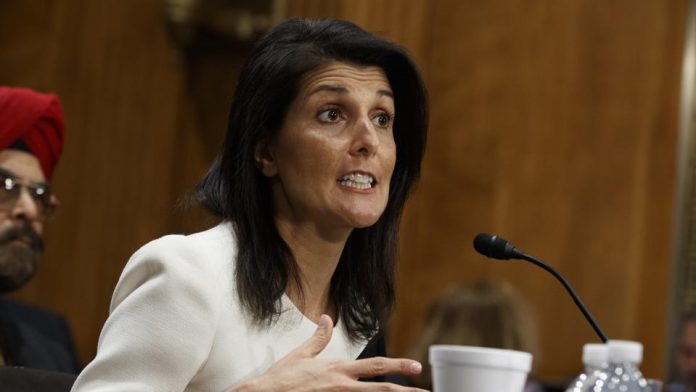 WASHINGTON: The United States on Thursday presented for the first time pieces of what it said were Iranian weapons supplied to the Iran-aligned Houthi militia in Yemen, describing it as conclusive evidence that Tehran was violating U.N. resolutions.
The arms included charred remnants of what the Pentagon said was an Iranian-made short-range ballistic missile fired from Yemen on Nov. 4 at King Khaled International Airport outside Saudi Arabia’s capital Riyadh, as well as a drone and an anti-tank weapon recovered in Yemen by the Saudis.
Iran has denied supplying the Houthis with such weaponry and on Thursday described the arms displayed as “fabricated.”
The United States acknowledged it could not say precisely when the weapons were transferred to the Houthis, and, in some cases, could not say when they were used. There was no immediate way to independently verify where the weapons were made or employed.
But U.S. Ambassador to the United Nations Nikki Haley expressed confidence the transfers could be blamed on Tehran.
“These are Iranian made, these are Iranian sent, and these were Iranian given,” Haley told a news conference at a military hangar at Joint Base Anacostia-Bolling, just outside Washington.
All of the recovered weapons were provided to the United States by Saudi Arabia and the United Arab Emirates, the Pentagon said. Saudi-led forces, which back the Yemeni government, have been fighting the Houthis in Yemen’s more than two-year-long civil war.
The unprecedented presentation – which Haley said involved intelligence that had to be declassified – is part of President Donald Trump’s new Iran policy, which promises a harder line toward Tehran. That would appear to include a new diplomatic initiative.
“You will see us build a coalition to really push back against Iran and what they’re doing,” Haley said, standing in front of what she said were the remnants of the Nov. 4 missile.
Israel, Saudi Arabia and the United Arab Emirates, who view Tehran as a threat, seized upon the U.S. presentation in calls on Thursday for international action.
Still, it was unclear whether the new evidence would be enough to win support for sanctions on Iran from some U.N. Security Council members, like Russia or China.
British U.N. Ambassador Matthew Rycroft said he didn’t think “there’s anything that could convince some of my council colleagues” to take U.N. action against Iran. Still, he said “we’re going to be pursuing with them nonetheless.”
Under a U.N. resolution that enshrines the Iran nuclear deal with world powers, Tehran is prohibited from supplying, selling or transferring weapons outside the country unless approved by the U.N. Security Council. A separate U.N. resolution on Yemen bans the supply of weapons to Houthi leaders.
Iran rejected the U.S. accusations as unfounded and Iran’s Foreign Minister Javad Zarif, on Twitter, drew a parallel to assertions by then-U.S. Secretary of State Colin Powell to the United Nations in 2003 about U.S. intelligence on weapons of mass destruction in Iraq.
No weapons of mass destruction were found in Iraq after the U.S.-led invasion.
The Pentagon offered a detailed explanation of all of the reasons why it believed the arms came from Iran, noting what it said were Iranian corporate logos on arms fragments and the unique nature of the designs of Iranian weaponry.
That included the designs of short-range “Qiam” ballistic missiles. The Pentagon said it had obtained fragments of two Qiam missiles, one fired on Nov. 4 against the airport and another fired on July 22.
The Pentagon cited corporate logos it said matched those of Iranian defense firms on jet vanes that help steer the missile’s engine and on the circuit board helping drive its guidance system. It also said the missile’s unique valve-design was only found in Iran.
Iran, it said, appeared to have tried to cover up the shipment by disassembling the missile for transport, given crude welding used to stitch it back together.
“The point of this entire display is that only Iran makes this missile. They have not given it to anybody else,” Pentagon spokeswoman Laura Seal said. “We haven’t seen this in the hands of anyone else except Iran and the Houthis.”
A Dec. 8 U.N. report monitoring Iran sanctions found that the July 22 and Nov. 4 missiles fired at Saudi Arabia appeared to have a “common origin,” but U.N. officials were still investigating the claims that Iran supplied them.
A separate Nov. 24 U.N. report monitoring Yemen sanctions said four missiles fired into Saudi Arabia this year appear to have been designed and manufactured by Iran, but as yet there was “no evidence as to the identity of the broker or supplier.”
The U.N. Iran and Yemen sanctions monitors “saw a majority” of the weaponry displayed by Haley, said a spokesman for the U.S. mission to the United Nations.
The Pentagon put on display other weapons with designs it said were unique to Iran’s defense industry. It pointed to a key component of a Toophan anti-tank guided missile and a small drone aircraft, both of which it said were recovered in Yemen by the Saudis.
It also showed components of a drone-like navigation system like the one the Pentagon says was used by the Houthis to ram an exploding boat into a Saudi frigate on Jan. 30. The United Arab Emirates seized the system in late 2016 in the Red Sea, the Pentagon said.
The U.N. Security Council is due to be briefed publicly on the latest U.N. report monitoring Iran sanctions on Tuesday. – Reuters