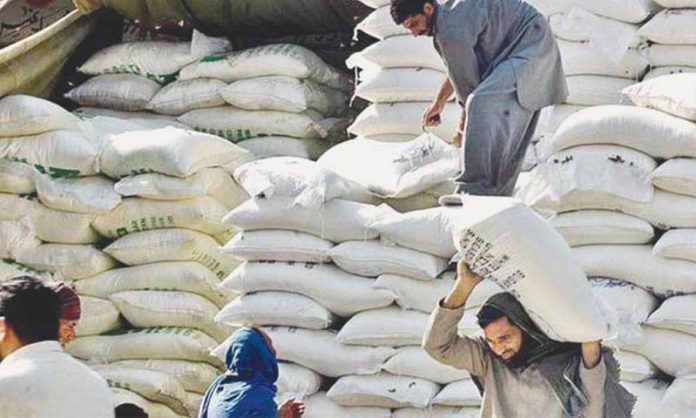 PESHAWAR: The supply of wheat flour from Punjab to Khyber Pakhtunkhwa has restored and a crisis in making has been avoided, an official of flour dealers body said.
“A convoy of 25 trucks, carrying consignment of wheat flour, has reached Peshawar,” the dealers association said.
The price of a 20 KG bag has dropped to 1100 rupees from earlier price of 1200, dealers said.
The country is facing mind-boggling hike in wheat flour prices as rates soared in Karachi, Lahore, Multan, Faisalabad, Peshawar and other major cities, causing an uproar across the country. The wheat flour rate in Karachi has soared to Rs 70 per kilogramme.
The situation further aggravated when the flour dealers in Peshawar disclosed that the, they have, is sufficient for only one day, while the KP government also contacted the government of Punjab seeking the food commodity.
The Nanbai Association Peshawar (bread-makers body) announced strike from Monday and demanded further increase in rates of bread in the city.
Taking notice of reports regarding hike in prices of wheat flour, Prime Minister Imran Khan on Saturday ordered a country-wide crackdown on hoarders and profiteers.
He directed the officials to take effective measures for stabilising the rates of wheat flour, the sources said and added that those involved in creating an artificial crisis of flour in the country will be dealt with iron hands.
Earlier in the day, Leader of the opposition in the national assembly, Mian Muhammad Shehbaz Sharif had slammed the surge in prices of wheat flour across Pakistan.
The Pakistan Muslim League Nawaz (PML-N) President had urged the government to reveal the truth on why Pakistan was faced with a shortage of the basic food commodity.
Shehbaz Sharif had said that it was the right of the people to know what happened to wheat stocks of the country. The opposition leader had said that the prime minister of Pakistan should take strict action against those involved in creating the conundrum and resolve the matter on an urgent basis.