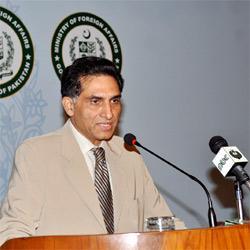 ISLAMABAD: Foreign Secretary Aizaz Ahmad Chaudhry visited the Pentagon to meet US Defence Undersecretary Christine Wormuth.
During the meeting, both sides discussed a wide range of issues related to bilateral defence cooperation, Ambassador Jalil Abbas Jilani accompanied the Foreign Secretary.
The Foreign Secretary expressed satisfaction that bilateral defence partnership has maintained robust momentum and remains on an upward trajectory.
It was agreed to continue high level exchanges and regular dialogues between defence communities of Pakistan and the United States.
Both sides agreed that Pakistan and the US defence cooperation was a factor of security and stability in the region.
The Foreign Secretary appreciated support by the United States in assisting Pakistan in its counter-terrorism campaign. He reiterated Pakistan’s strong resolve to defeat terrorist networks on its soil.
Both sides also reviewed developments in the region and agreed on the need to further strengthen mutually beneficial security cooperation. – APP