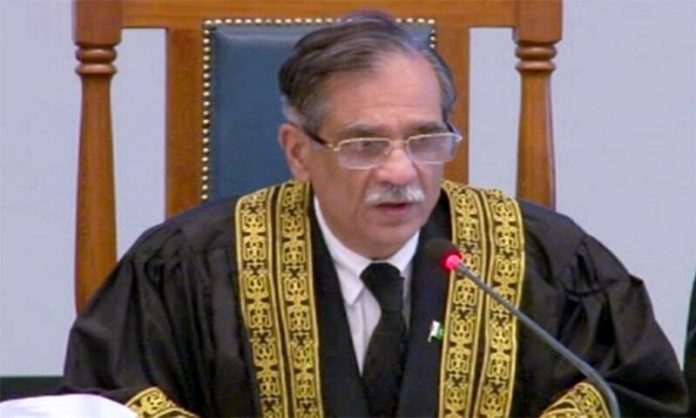 The former chief justice of Pakistan, Justice (retired) Saqib Nisar, on Sunday has denied the authenticity of the audio clip attributed to him. Recently, an audio clip allegedly featuring Nisar was leaked in which the ex-CJP purportedly told another person that Nawaz Sharif and his daughter Maryam Nawaz would have to be punished to make space for Imran Khan in politics.

In the audio clip, he could allegedly be heard saying that “even though there are no cases against Maryam Nawaz, she would still have to be punished.”

Speaking to a private TV, Nisar refused to accept that it was his voice and termed it fabricated. “The audio clip is being falsely associated with me,” he stated.

When asked if he would take legal action against the audio clip being associated with him, Nisar said he is thinking about “which legal option to go with.”

When the audio was initially leaked, Nisar had said that the report was “contrary to facts” and had categorically denied that he had ever directed any of his subordinate judges in connection with any judicial order whether it pertained to Nawaz Sharif, Shehbaz Sharif, Maryam Nawaz, or anyone else.

It should be noted that on November 15, ex-chief justice of the Gilgit-Baltistan apex court had levelled serious allegations against Nisar, stating in a notarised affidavit that he had been witness to the then CJP Nisar’s direction to a high court judge not to release Nawaz Sharif and Maryam Nawaz on bail at any cost before the 2018 general elections.