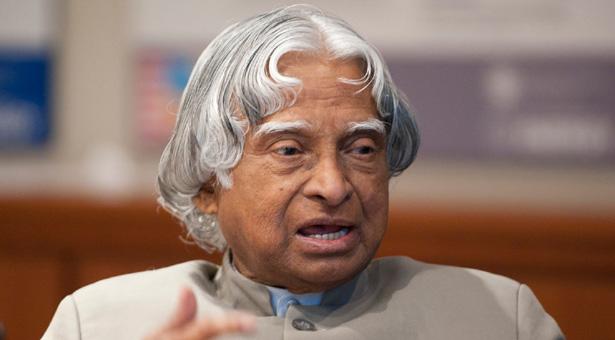 NEW DELHI: Former president of India and globally renowned scientist Abdul kalam passed away Monday at the age of 83 in Shillong – the capital of north-eastern Indian state of Meghalaya.
According to Indian media, Kalam died after collapsing during a lecture due to heart seizure.
He was rushed to a nearby hospital, where doctors said that the former president was brought dead at around 7 PM while attributing his death to cardiac arrest.
Kalam enjoyed support of the two largest political parties in India – Bhartiya Janata Party (BJP) and Congress – during his five-year-long stint at the presidency between 2002 and 2007.
India declared seven days of national mourning for Avul Pakir Jainulabdeen Abdul Kalam, who served as India’s 11th president, as is standard after the death of a former leader.
His body will be flown to New Delhi on Tuesday, local media reported.
India’s Prime Minister Narendra Modi paid tribute to Kalam, who was elected to the top post during the previous BJP rule, saying he had “always marvelled at his intellect, learnt so much from him”.
“India mourns the loss of a great scientist, a wonderful president and above all an inspiring individual,” his office said in a statement.
An acclaimed scientist and author, Kalam was known as the “people’s president” during his time in office and continued to reach out to young people with his scientific lectures after leaving office.
Born to a poor family of boatman in Rameswaram, a coastal town in southern Tamil Nadu state on October 15, 1931, Kalam sold newspapers as a child to help his family financially.
He rose through the ranks to become a top scientist at India’s defence research organisation, where he worked for four decades helping to develop the country’s home grown weapon’s programme, earning him the moniker “India’s missile man”.
He also played a pivotal role in India´s nuclear weapons tests in 1998.

After his presidential term, Kalam returned to academics and regularly delivered lectures at top Indian universities. He also published a best seller autobiography entitled “Wings of fire” in 1999…Agencies