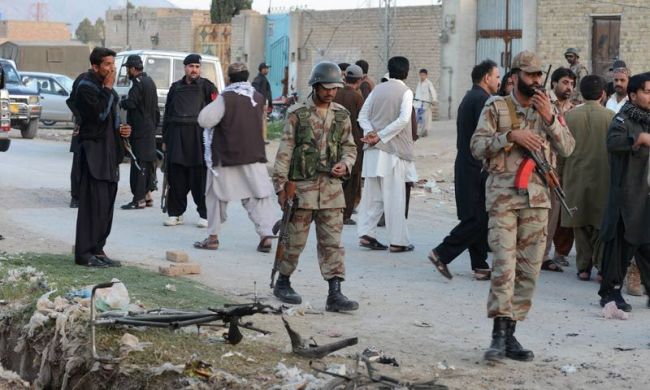 QUETTA: At least four personnel of the Frontier Corps laid their lives and three others were injured when a remote-controlled bomb hit their vehicle in Balochistan’s Kech district on Sunday evening.
Security sources said that unidentified miscreants targeted the convoy of Frontier Corps, a paramilitary force, in Mand tehsil of Kech district. The vehicle was destroyed due to the intensity of the blast, the official said.
The intensity of blast completely destroyed the vehicle of FC personnel.
The FC convoy was on routine patrolling when it was targeted by unidentified miscreants, he said.
The injured FC personnel were rushed to Turbat hospital for medical treatment.
The FC and Levies personnel reached the spot following the incident as the investigation into the incident went underway. Security was tightened in the area following the terrorist attack.
Meanwhile, Balochistan Chief Minister Nawab Sanaullah Zehri was quick to condemn the incident soon after it occurred. He reportedly directed the law enforcement agencies to bring the perpetrators of the terror attack to book.
FC personnel sacrificed their lives for guarding the motherland and innocent citizens, the chief minister said in a statement issued to the press.