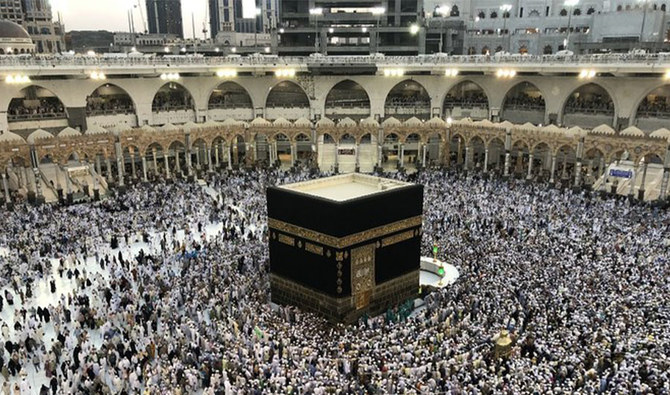 ISLAMABAD: The Ministry of Religious Affairs and Interfaith Harmony has announced it will start refunding Hajj dues to all applicants for this year from Thursday.
According to a spokesperson of the religious ministry, the decision has been taken in light of the Saudi government’s decision to hold a limited Hajj this year due to the coronavirus pandemic.
The spokesperson said the amounts deposited by hopeful pilgrims will be refunded through scheduled banks across the country and all applicants are being informed via SMS.
“Applicants should come in person to receive the amount in cash, while group leaders should come to the bank with all original documents of group members in case of receiving through cheque,” the spokesperson said.
Applicants can contact Accounts Officer Refund at 051-9208465 in case of any difficulty in the refund process, the spokesperson added.
Earlier this week, Saudi Arabia had announced it would hold Hajj 2020 with a “very limited number” of pilgrims residing in the country.
The Kingdom later said it will allow only around 1,000 pilgrims residing in the country to perform the pilgrimage.
“The number of pilgrims will be around 1,000, maybe less, maybe a little more,” Hajj Minister Mohammad Benten told reporters.
“The number won’t be in tens or hundreds of thousands” this year, he added.
The pilgrimage, scheduled for the end of July, will be limited to those below 65 years of age and with no chronic illnesses, Health Minister Tawfiq al-Rabiah had added.
The pilgrims will be tested for coronavirus before arriving in the holy city of Makkah and will be required to quarantine at home after the ritual, Rabiah added.
“As COVID-19 cases continue to grow globally while the risks of Coronavirus spread in crowded spaces and to countries still exist, Hajj 1441H is decided to take place this year with a limited number of pilgrims from all nationalities residing in Saudi Arabia only, who are willing to perform Hajj,” the Saudi Hajj ministry statement had said.
The ministry said that the decision to hold the restricted pilgrimage was taken to ensure that the Hajj was safely performed “while committing to all preventive measures to protect Muslims and adhere strictly to the teachings of Islam in preserving our health and safety”.
“The Custodian of the Two Holy Mosques’ government is honoured to serve millions of Hajj and Umrah pilgrims annually,” it said.
“It confirms that this decision is in consideration of its constant care of maintaining the safety of pilgrims on its land until departing back to their home countries. We ask Allah the Almighty to protect all countries from this pandemic and keep all humans protected and safe,” it added.
The decision marks the first time in Saudi Arabia’s modern history that Muslims outside the Kingdom have been barred from performing the Hajj, which last year drew 2.5 million pilgrims.
The Hajj — a must for able-bodied Muslims at least once in their lifetime — typically packs millions of pilgrims into congested religious sites and could be a major source of contagion.