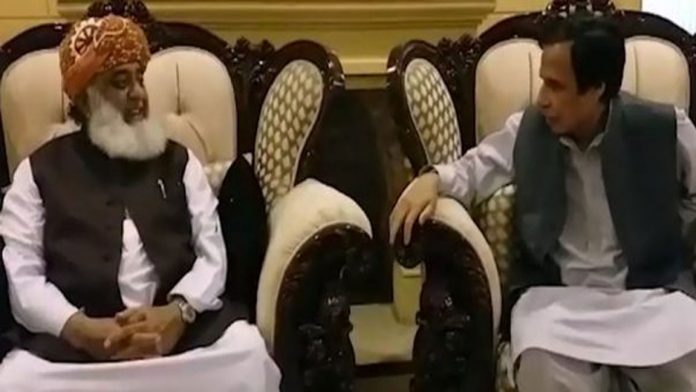 ISLAMABAD: The Pakistan Tehreek-e-Insaf (PTI) government has agreed to form a judicial commission on allegations of rigging by opposition parties in the general elections 2018.
According to sources, Prime Minister Imran Khan has offered to hold an investigation into alleged election rigging.
The proposal was presented to the JUI-F chief Maulana Fazlur Rehman through Punjab Assembly Speaker Chaudhry Pervez Elahi. The federal government has invited the opposition to prepare terms of reference (TORs) with National Assembly Speaker Asad Qaiser.
The government has also agreed in making the parliamentary committee functional for 2018 election rigging probe, the sources said.
Meanwhile, Speaker Punjab Assembly Pervez Elahi, in a statement has said that the prime minister’s resignation is out of the question.
“The government will not accept the opposition’s demand for fresh elections and PM Imran’s resignation,” he said, adding that Pakistan Muslim League-Nawaz (PML-N) also completed its five-year tenure.
Pervez Elahi said that he has briefed PM Imran Khan about his meetings with JUI-F chief Maulana Fazl-ur-Rehman.
Deadlock is over PM’s resignation, early elections: Pervez Khattak
Head of government’s negotiation committee Pervaiz Khattak said opposition and government are in deadlock over demand of PM’s resignation and new elections in the country.
Talking to media in Islamabad, he said opposition must provide proves of rigging in 2018 general elections.