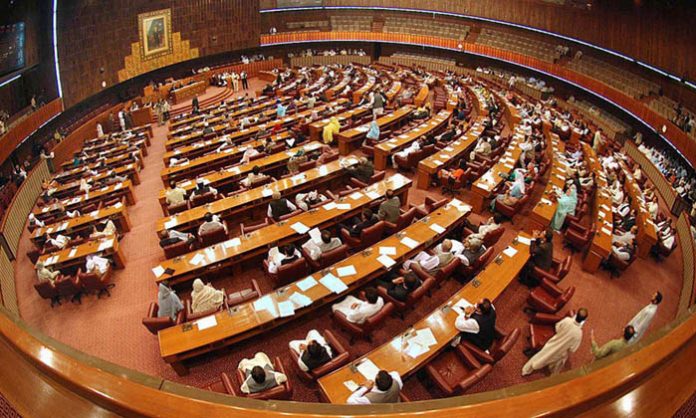 ISLAMABAD: The National Assembly was informed on Wednesday that the return of Internally Displaced Persons (IDPs) to their homes will be ensured by November this year.
Minister for States and Frontier Regions Abdul Qadir Baloch told the House during question hour that 70 percent IDPs have already returned to their places of origin. He said that under the FATA Reforms Package, the merger of Tribal Areas into Khyber-Pakhtunkhwa has been proposed. However, the creation of new province for FATA may be considered if political parties, the Parliament and the tribal people agree on it.
Abdul Qadir Baloch said that situation has improved to a great deal in the tribal areas and development schemes will be fully implemented in order to bring improvement in the lives of the people there.
Advisor on Foreign Affairs Sartaj Aziz told the House that Islamophobia is widespread in the European countries and efforts are being taken from the platform of OIC to offset the negative impression against Islam. He said Islam is a peace loving religion and linking one particular religion with terrorism is not appropriate.
Sartaj Aziz said that 242 prisoners are languishing in jails of Afghanistan and 231 in India. He said our missions abroad provide all possible legal and consular assistance to these detainees.
Minister for Inter-Provincial Coordination Riaz Hussain Pirzada told the House that the meeting of Council of Common Interests will soon be held as a summary in this regard has been sent to the Prime Minister.
Minister for Commerce Khurram Dastgir Khan informed the House that unprecedented incentives were announced for the promotion of agriculture sector in the current fiscal budget.
He said that negotiations are at advanced stages for signing free trade agreements with Thailand and Turkey.
Parliamentary Secretary for Overseas Shafqat Baloch told the House that Pakistan has signed MoUs with four Gulf countries including Bahrain, Kuwait, Qatar and UAE for the export of significant number of skilled manpower.
Responding to a calling attention notice moved by Tahira Aurangzeb and others, Parliamentary Secretary for National Health Services Dr Darshan told the House that the government has launched health insurance scheme to provide better healthcare facilities to all.
He said a programme has been started with the cooperation of the United Nations to address the issue of malnutrition amongst children and women.
Responding to another calling attention notice, Parliamentary Secretary for National Health Services Dr Darshan told the House that Federal Government will sit with the provincial governments in order to bring improvements in different health related programmes including maternal and child healthcare.
He said Pakistan is signatory to Sustainable Development Goals and therefore committed to bring improvement in its health indicators.
Initiating the debate, Shahabuddin appreciated the committee on FATA Reforms for framing the recommendations on reforms in the tribal areas after holding extensive talks with all the relevant stakeholders.
Haji Bismillah said that the tribal people have always rendered sacrifices for Pakistan and there is dire need to bring them into the national mainstream.
Nasir Afridi said FCR should be abolished and future status of the tribal areas should be determined as the aspirations of the local people.
Ghazi Gulab Jamal said that process of change should be gradual keeping in view the ground realities in the tribal agencies.
Sajid Toori said the representatives of FATA fully endorse FATA reforms package.
Muhammad Nazir Khan termed the FATA Reforms Package as a historic achievement, hoping it will help improve the lot of the tribal people. He emphasized the need for building health, education and other basic infrastructure in the FATA.
The House will now meet tomorrow morning at 10:30.