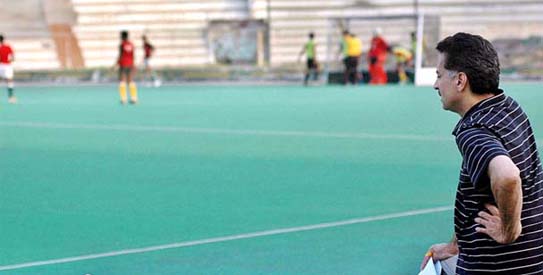 ISLAMABAD: Hockey legend Hassan Sardar was handed the dual role of head coach and manager of the national team on Thursday, with Rehan Butt and Muhammad Saqlain to serve as his assistants.
Sardar, a former captain of the Green Shirts who won both the World Cup and an Olympic gold in a glittering playing career, replaces Farhat Khan in the dugout. The former centre half will now be in charge for the upcoming two-match series against a World XI side.
Meanwhile, Islahuddin Siddique has been appointed the team’s chief selector — a position he has previously held.
The World XI are scheduled to play a one-match each in Karachi and Lahore during their four-day visit from January 18 to 21.
The Pakistan Hockey Federation sees the series as an opportunity to demonstrate that Pakistan is safe to visit and to convince international players to participate in the upcoming Pakistan Hockey League.