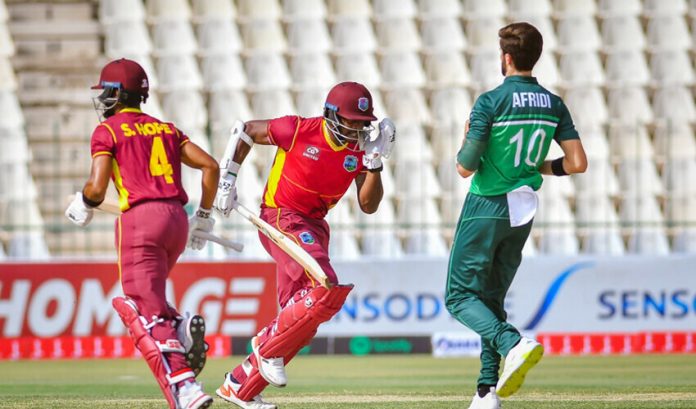 Hosting the first ODI after a gap of over 14 years, the game hasn’t disappointed so far at the venue. Fans witnessed a mixed batted on a batting-friendly track of the Multan Cricket Stadium.

Despite suffering an early bowl in the shape of Kyle Mayers’ wicket after opting to bat, the visitors kept the scoreboard running.

The pair of Hope and Shamarh Brooks was outstanding with the bat, as they safely negotiated the threat of Pakistan spin attack in the middle.

They made a 154-run stand for the second wicket, to bring their team back in the game. Their partnership was broken by Mohammad Nawaz in the 31st over of the innings.

Brook (70) was sent packing by the spinner courtesy of a breathtaking catch from the Pakistan vice-captain Shadab Khan.

His departure didn’t stop the runs flow from the visitors. Skipper Nicholas Pooran, who showed aggressive intent with the bat, hitting three maximums for 21, was removed by Haris Rauf. Hope kept the scoreboard ticking from the other end with Rovman Powell in the middle.

Hope completed his 12th ODI century for the West Indies – his first against Pakistan and seventh in Asia. He departed after scoring 127 – the highest individual score at the Multan Cricket Stadium.

Romario Shepherd (32) and Powell (25) added finishing touches to the innings as the visitors reached 305-8 in their 50 overs.

For the home side, Shadab Khan bowled an economical spell, where he registered figures of one for 37 in his 10 overs. Meanwhile, Shaheen Shah Afridi claimed two wickets in the game.

Haris Rauf had an expensive outing with the ball as he registered figures of four for 77 in his 10 overs.