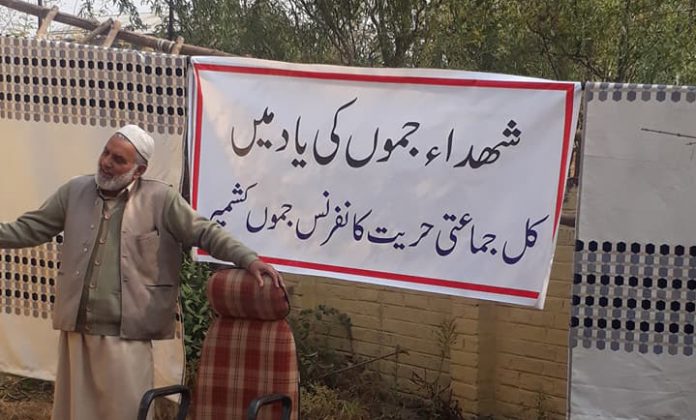 ISLAMABAD: The leaders of All Parties Hurriyat Conference AJK chapter (APHC-AJK) Monday reiterated its firm resolves to continue peaceful struggle till the winning the right to self determination in accordance with United Nations resolutions. Speaking in a seminar organized here in connection with Youm-e-Shuda-e-Jammu and Kashmir to pay tributes to martyrs of the Jammu massacre of November 6, 1947, they said the Nov 6 was the blackest day of the history. APHC leaders said sacrifices of offered on November 6, 1947 would never be forgotten. The Indian army would have to vacate the occupied valley as a result of peaceful movement. Stressing the need to reorganize Kashmir struggle movement, they urged United Nations help Kashmiris in implementing UN resolutions. Meanwhile, according to a message received here,  a seminar was also organized by the All Parties Hurriyat Conference in Srinagar, to pay tributes to Jammu martyrs. The function was addressed among others by Ghulam Nabi Sumjhi, Zamrooda Habib, Ghulam Ahmad Gulzar, Muhammad Yousuf Naqash, Hakeem Abdur Rasheed, Ghulam Muhammad Nagu, Muahammad Saleem Zargar, Imtiaz Ahmad Shah, Muhammad Yasin Atai, Syed Muhammad Shafi, Syed Bashir Ahmad Andrabi and Maulvi Bashir Ahmad. The speakers said that the Jammu massacre in 1947 was the worst example of genocide intended to change the demographic composition of the territory. …APP