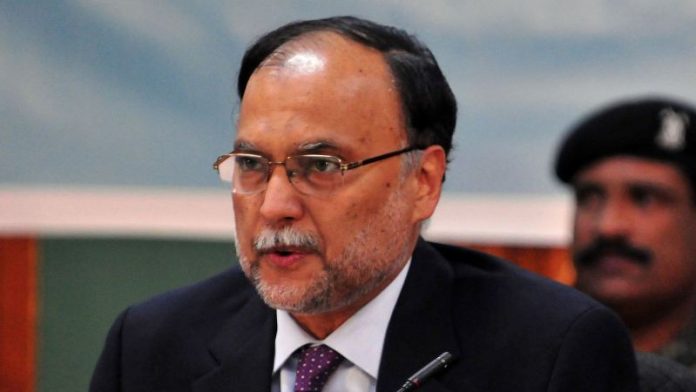 A two-member bench under Islamabad High Court Chief Justice Athar Minallah gave the ruling after completing the hearing on a petition from Ahsan Iqbal on Wednesday.

Iqbal, who is the planning minister in the current government, appeared before the court.

During the hearing, Justice Minallah came down hard on the NAB prosecutor, who repeatedly requested the court to adjourn the hearing.

The NAB prosecutor also said that the matter could be seen under the new NAB amendment ordinance.

However, Justice Minallah said that the court was not going to look into any new ordinance.

The justice said that losses in the project were caused when it was delayed before 2009. The prosecutor admitted that Iqbal did not hold any government office in 2009.

When Justice Minallah asked the prosecutor to explain what was the corruption in the project, he said that the project was moved from the Punjab government to the federal ministry for planning and development under Iqbal while it was a provincial subject after the 18th amendment.

“Then what misuse of power Ahsan Iqbal committed?” the IHC chief justice asked.

Justice Minallah also criticized the then NAB Chairman for filing the reference on the basis of a news item published by little-known newspaper Metro Watch.

When Justice Minallah pressed the NAB prosecutor to explain what the accountability body meant by corruption in the reference, he said that the additional prosecutor general was to present the arguments but he was not available on Wednesday.

The court refused to grant more time to NAB and announced the verdict.

Speaking to reporters outside the courtroom, Ahsan Iqbal said that he was thankful to Allah Almighty for winning an acquittal in the reference.

Iqbal said that he was thrown into a death cell after being arrested by NAB in the case and cameras were installed in his death to monitor how he was spending his days.

He said that Imran Khan filed cases against PMLN leaders on false allegations and led a smear campaign labeling them ‘thieves and robbers’.

Now everyone can see the truth about these cases.

The minister said that Narowal Sports Complex will be completed and that the losses incurred due to delay will be recovered from Imran Niazi and the NAB.