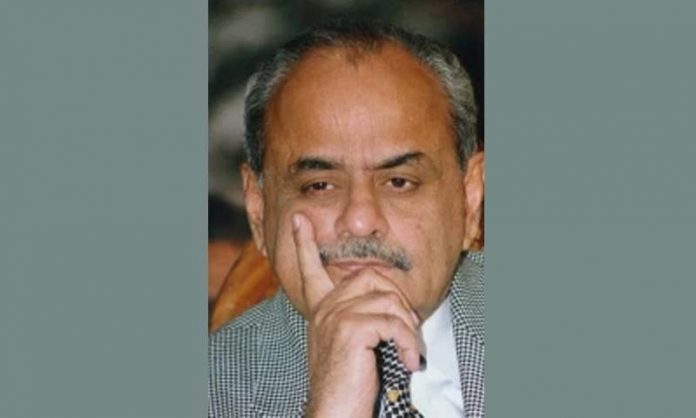 ISLAMABAD: Brigadier (retd) Ijaz Ahmed Shah, who was appointed as the interior minister a day earlier as part of the major cabinet reshuffle, took charge of the ministry on Friday.
Shah reached the Ministry of Interior office in the R block of the PM Secretariat and took charge of his post.
The prime minister earlier held the portfolio of interior minister himself.
Shah, a MNA from Nankana Sahib, was appointed as federal minister for parliamentary affairs last month — a post that has now gone to Azam Swati as part of the reshuffle. Shah was an aide of former president Pervez Musharraf and served as director general of the Intelligence Bureau (IB) from 2004 to 2008.
Prime Minister Imran Khan on Thursday reshuffled his cabinet with Hafeez Sheikh appointed finance adviser, after the departure of Finance Minister Asad Umar.
The cabinet reshuffle comes at a time of growing pressure with the rupee losing 30 percent of its value since the start of 2018, stirring sharp inflation.
Fawad Chaudhry has been removed as information minister and handed over Ministry of Science and Technology, according to a statement issued by the PM House.
Minister of State Shehryar Afridi has been handed over the Ministry of States and Frontier Regions (SAFRON), while Ghulam Sarwar Khan appointed minister for aviation the statement said.
Azam Swati has been appointed as federal minister for parliamentary affairs, it said, adding that Federal Minister for Privatisation Mohammad Mian Soomro shall cease to hold additional portfolio of Aviation Division.
The statement further read that Dr Zafarullah Mirza, Firdous Ashiq Awan and Nadeem Babar have been appointed special assistants to the prime minister for national health services, information and petroleum division, respectively.