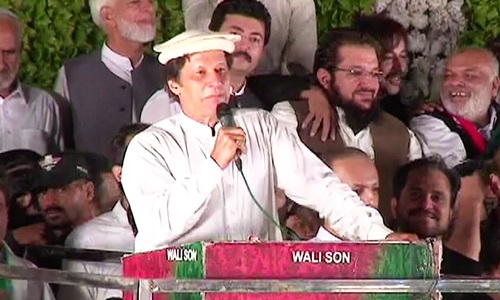 RAWALPINDI: Pakistan Tehreek-e-Insaf chairman Imran Khan on Sunday warned of any attempt to make amendments to the constitution of Pakistan to favour ousted Prime Minister Nawaz Sharif and threatened to take to the streets.
Addressing the ‘Azadi Jalsa’ at the historic Liaquat Bagh, the PTI chairman strongly criticised a conspiracy to repeal Article 62 and 63 from the Constitution, which stipulates that a leader must be Sadiq and Ameen (honest and trustworthy).
“Do you want to insert in the constitution that a leader once elected should be given the freewill to plunder the state,” he said warning to take to the streets and gather more people than Nawaz Sharif if any such attempt was made to the constitution of Pakistan.
He said that Nawaz Sharif has been asking why he was dismissed from power when he was given the mandate to govern by the people of the country.
“Was Nawaz Sharif given a mandate to make Pakistan an ‘Asian Tiger’ or plunder the wealth of the nation,” he asked questioning why the National Accountability Bureau has not opened corruption references despite being instructed by the Supreme Court.
He said that Nawaz sharif has claimed that there is a conspiracy against him and has pointed fingers at the judiciary and the military. “The Pakistan Army has repeatedly said that it will support democracy in the country.”
“The truth is that you (Nawaz Sharif) have been caught after due judicial process and case was fought against you since the last ten months,” he said.
He said that only two type of people are supporting Sharif including those whose have economic interests associated with him and those who were misleading by him including some media houses motivated solely by money.
“For three years, Nawaz Sharif was controlling all the institutions. This is the first time he wasn’t able to control the joint investigation team or the Supreme Court, and is calling it (his disqualification) a conspiracy,” he said.
“This is not a conspiracy, this is Naya Pakistan,” he said throwing his support behind the judiciary. He said this was the era of social media where youth and women were more aware. “The nation will stand by the Supreme Court.”
He underlined his vision for a prosperous Pakistan including a just taxation system, excellent public sector education, free treatment in hospitals, coherent agricultural and industrial policy to provide employment and eliminate poverty and a merit-based society based on fair and accountability, and a clean and green nation.
Imran Khan who was addressing the crowd at Liaquat Bagh after six years, praised Awami Muslim League chief Sheikh Rashid Ahmed for “waging a jihad against corruption and political mafia since the last nine years.”