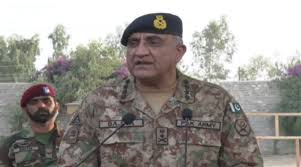 RAWALPINDI: Chief of Army Staff (COAS) General Qamar Javed Bajwa has said that unprovoked Indian Cease Fire Violations (CFVs) would be responded effectively, read a statement issued by the Inter-Services Public Relations (ISPR) on Tuesday.
During his visit to Mattewala in Munawwar Sector on the Line of Control (LoC), General Qamar Javed Bajwa said that Pakistan Army soldiers were known for the professional competence, motivation and selfless devotion for defense of the country.
The COAS said that Indian CFVs have design to divert world’s attention from her atrocities in Kashmir on one hand but on the other, it is an attempt to dilute our response against terrorism and militancy.
Targeting the innocent civilians along LoC was deliberate and highly reprehensible, said that the Army Chief and added that Pakistan was fully aware of Indian design and her support for terrorism in Pakistan and in the region.
After a detailed briefing about Pakistan Army’s operational situation on LoC, General Qamar Javed Bajwa also appreciated operational readiness of the troops.